We Need an NFL of Heroes

Tight end Jason Witten #82 of the Dallas Cowboys looks on during a NFL game against the Tennessee Titans at LP Field on September 14, 2014 in Nashville, Tennessee.
Ronald C. Modra/Sports Imagery—Getty Images
Ideas
By Jean Case

Jean Case is CEO of the Case Foundation, a nonprofit organization in Washington, DC, that invests in people and ideas that change the world.

My earliest memories of football involve the game being played on our living room floor in the house where I lived as a young girl. I grew up in a neighborhood full of boys and in a family that included two big brothers. Many afternoons after school the boys would gather to play football and I didn’t like being left out. One day my exasperated older brother said, “If you want to play the game, you have to learn it first” and he proceeded to teach me the game in living room – he on his knees, me standing up – his attempt to make it fair. Soon after, I held my own as I joined the neighborhood teams made up of boys, and thus began a lifelong love of the game.

So you can imagine my delight when shortly after the founding of the Case Foundation, where I serve as CEO, I found myself at a dinner with one of the greatest NFL heroes of all time – Roger Staubach. I shared with this small table of friends that our foundation was leading a new initiative to create 1,000 after-school technology centers in low-income neighborhoods across the United States, in an effort to address the digital divide. Without hesitation, Roger offered to help – and subsequently joined the board of the initiative, became a great champion of the work and played a key role in helping us meet our goals.

Here in Washington D.C., where the Case Foundation is headquartered, we’ve had the privilege of supporting former Washington players like Darrell Green, Art Monk and Charles Mann, who together have made an indelible mark with their work in disadvantaged neighborhoods across the city, touching lives and inspiring others.

In my work in the Bush Administration as Chair of the President’s Council on Service and Civic Participation, we had active engagement of two remarkable leaders from the NFL: Tony Dungy and Danny Weurfel. Both men have made countless contributions to their communities, with a special focus on the most vulnerable, not just focused on charity, but on modeling a life of what it means to be a strong man of character and commitment. Tony Dungy, the first African American coach to win the Super Bowl, had this to say last week: “I always felt my job was not just to have my players play on the field, but you’re trying to help them grow, help them be good people and make community a better place to live.”

These men and others contributed to the image of the NFL in my mind – remarkable heroes who worked equally tirelessly on and off the field. Sure, I knew of the stories of the bad actors and the many players who made serious mistakes, but as a fan I didn’t let that stop me from enjoying the game.

Then the events of this past week unfolded and stopped me in my tracks. I have been deeply saddened by the recent events that spotlighted the role of celebrated NFL players in horrific acts of violence against women and children. While just as upset and shocked as anyone else, I kept thinking, this isn’t the NFL I first came to know and love. So what’s happened?

It’s easy to blame the National Football League for what we witnessed this week, but in reality, I think every football fan needs to pause and consider what unintentional role they may have in creating a culture that glorifies performance on the field and ignores the rest of the story. There are many, many athletes of strong character and generosity of heart, who are committed husbands and fathers.

While this week Ray Rice and Adrian Peterson had the headlines, we need to remember this is also the NFL of upstanding men like Drew Brees, Charles Tillman, Russell Wilson and Jason Witten. Witten, who after experiencing domestic violence as a child, formed the Jason Witten’s SCORE Foundation. Its initiatives include a domestic violence prevention program called “Coaching Boys Into Men” in high schools across Arlington, Texas. The program trains coaches to educate their players on the dangers of dating violence. These players join many others whose integrity and commitment lift the culture and spur hope and opportunity in their communities.

Interestingly, many of these same “good guys” are among the league’s best performers on the field, too. As fans, if we glorify what happens on the field and ignore the larger character off the field, in a sense we are contributing to the culture many of us want to see changed. If players fundamentally understood that to succeed in the business of football, you have to toe the line, would it change things?

It turns out there are numerous awards for character, leadership and generosity in the NFL – the Walter Peyton Award, the Bart Starr Award, James Brown’s JB Awards, and many, many more. But if you ask fans to name the players that have received this prestigious recognition, most would come up short, which says a lot about what we really glorify in the sport. Even Wikipedia pages of these leaders often leave off any mention of these awards.

Although I’ve spent nearly two decades as CEO of a foundation that works to strengthen our communities, as a fan I’m much more likely to know who has been named the Fastest Man in the NFL than the man found to have the strongest character on and off the field.

As I set my lineup in my Fantasy League last week, I thought maybe it’s time for a new Fantasy Football Lineup – one that ranks players based both on their in-game performance, along with their full character and commitment, played out both on the field and in their daily lives. It shouldn’t be a “fantasy” to recognize and reward leadership and contributions in football that creates a new model of what it means for a man to be strong.

Until fans demonstrate what should rightfully be glorified, we may not see the NFL change.

Jean Case is CEO of the Case Foundation, a nonprofit organization in Washington, DC, that invests in people and ideas that change the world. 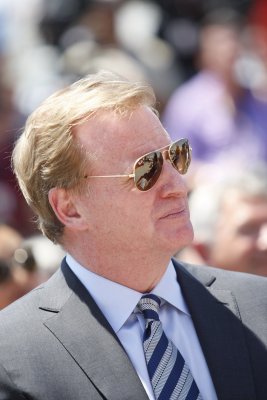 How 3 CEOs Got Ousted—and Goodell Could Be Next
Next Up: Editor's Pick