The Fed Is Staying the Course, and That's Great

Janet Yellen, chair of the U.S. Federal Reserve, listens to a question during a news conference following a Federal Open Market Committee (FOMC) meeting in Washington on Sept. 17, 2014.
Bloomberg/Getty Images
By Michael Grunwald

The Federal Reserve’s monthly statement Wednesday was typically dull. Basically, the Fed is staying the course, because the economy is continuing a path of gradual improvement.

The Fed continued its “taper,” reducing the monetary stimulus it’s pumping into the economy by $10 billion for the 10th consecutive month, while announcing that this stimulus—known as “QE3”—should end on schedule next month. The Fed also continued to signal it won’t raise interest rates above zero “for a considerable time,” despite speculation it might soften that language. Fed Chair Janet Yellen then devoted most of her news conference to a mind-numbing discussion of procedural arcana involving “policy normalization principles” and “overnight RRP facilities.”

This is not exciting stuff. But boring monetary policy is an excellent thing to have, especially just six years after a spectacular financial crisis. At the time, the Fed took all kinds of unprecedented actions to save an economy that was contracting at an 8% annual rate and shedding 800,000 jobs a month. Some critics thought those actions would fail to prevent a depression. Others thought they would lead to hyperinflation, a devastating run on the dollar, or a double-dip recession. Instead, we’ve had 54 straight months of job growth. The jobless rate is down from 10% to just over 6% percent. The stock market is booming. Last year, the U.S. had its largest one-year drop in child poverty since 1966, and this year is looking even better. Two of the Fed’s inflation hawks actually dissented from the latest statement, arguing it “does not reflect the considerable economic progress that has been made.”

In other words, things are OK.

Things are not great; as Yellen pointed out, many American families are still dealing with aftershocks of the crisis, including tight credit, lingering debt, depressed wages and a shortage of jobs. Incomes for the non-rich have grown modestly since 2010 and not at all since before the crisis, although tax cuts for the middle class and the poor, tax increases for the rich, and expanded government benefits for the vulnerable have helped offset those trends. It’s true that our recovery from the Great Recession has been slower than previous recoveries from ordinary recessions. But it has been much stronger than previous recoveries in nations that endured major financial crises—and much stronger than Europe’s current recovery. The euro zone’s output has not yet reached pre-crisis levels; it’s still struggling with 12% unemployment and a risk of deflation.

We’re doing a lot better than that. We had more effective bank bailouts, more generous fiscal stimulus—until Republicans took over the House after the 2010 midterms and began demanding austerity—and much more accommodative monetary policy. It’s all worked remarkably well. We’ve faced some headwinds—the contagion from the near-collapse of Greece in 2010, the turmoil after we nearly defaulted on our debt in 2011—but the economy has continued its path of slow but steady growth. That’s why Yellen was able to discuss those mind-numbing “policy normalization principles,” the guidelines the Fed will follow as it starts raising rates and reining in its bloated balance sheet in 2015. We’re approaching normal. And the Fed’s forecast for the next few years also looks pretty decent.

It doesn’t look fantastic. But in 2008, the U.S. suffered a horrific financial shock, with a loss of household wealth five times worse than the shock that preceded the Depression. We’re still dealing with the aftershocks. Many Americans still don’t feel like the economy is working for them, an understandable reaction to persistent long-term unemployment, stagnant wages, and continuing foreclosures.

But as dull as it sounds, it’s working better every year. The lesson of our current plight is not that the system doesn’t work. It’s that financial crises really suck. 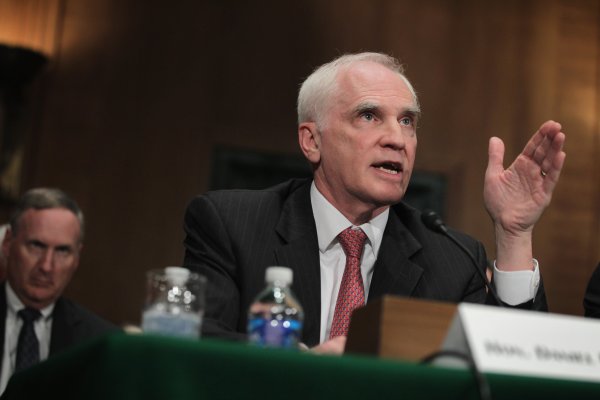 U.S. Bank Regulators Promise to Get Tough
Next Up: Editor's Pick