President Barack Obama walks out of the Oval Office towards the South Lawn of the White House in Washington, on Aug. 29, 2014.
Charles Dharapak—AP
By Dan Hirschhorn

Americans’ approval of President Barack Obama has dropped to a new low rivaling even the unpopularity that saddled George W. Bush at the same point of his presidency, according to a new poll, a troublesome sign for Democrats just weeks before the midterm elections.

The New York Times/CBS News survey released Wednesday showed that 50% of Americans disapprove of Obama’s job performance, while 40% approve. By comparison, in September of 2006 56% of Americans disapproved of Bush’s job performance. Obama gets worse marks on handling the economy and foreign policy, signaling that the sluggish economic recovery hasn’t won Obama any political points and that the renewed U.S. fight against Islamist militants in Iraq is weighing down his party.

After Bush had similarly poor approval ratings in 2006, Democrats enjoyed a wave election that gave them control of Congress for the first time in over a decade. And the poll points to a promising midterm election cycle for Republicans. The GOP bests Democrats when voters are asked which party’s congressional candidate they would vote for in their district—a so-called “generic ballot” measurement that Democrats typically need to win by large margins in order to avoid losing seats. Voters trust Republicans more to handle the economy, foreign policy and terrorism, according to the poll.

The survey of 1,009 Americans, conducted Sept. 12-15, has a margin of error of plus or minus three percentage points. See the full poll results here. 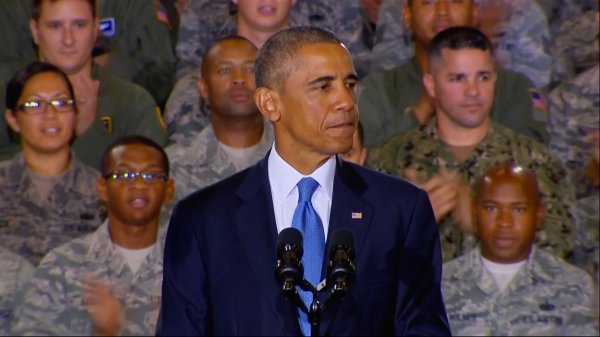 Live: Obama Speaks About ISIS
Next Up: Editor's Pick