Musician Bob Geldof speaks to members of the public and supporters of the Better Together campaign at Trafalgar Square in London on Sept. 15, 2014
Dan Kitwood—Getty Images
By Naina Bajekal

As Scotland prepares to vote in Thursday’s momentous independence referendum, the buzz is growing. If the pro-independence Yes campaign wins, the U.K.’s political map will be forever changed. But those watching from outside Scotland — both expats and non-Scottish Brits — have lamented the fact that the future of the U.K. lies in the hands of just 8.3% of its population.

Any British or E.U. citizen ages 16 or over currently residing in Scotland was eligible to register for the vote. Around 15% of the electorate (650,000 people) were born outside Scotland but are now living there — J.K. Rowling is a famous example. But the 59 million U.K. citizens living outside Scotland — who include more than 800,000 Scots who moved south of the border at some point before September 2014 — are not permitted to vote in Thursday’s referendum. And many aren’t happy about it.

Writing in the Daily Telegraph last week, eminent BBC broadcaster and journalist Jeremy Paxman called it a “real scandal” that “in this union of supposed equals, only one side gets to vote on whether the union continues.” Paxman, who is one-quarter Scottish, points out that the resentment of Westminster politics driving support for the pro-independence campaign is not confined to Scotland. There are plenty of British citizens, he writes, especially those from outside London, “who think the Westminster Parliament is remote and unrepresentative. Some of them believe that it is not just unattractive but also absurd. They’re just not being offered a chance to say so.”

Paxman isn’t the only one angry at not getting a say. In January 2012, Labour Party politician Baroness Symons called for U.K.-wide participation on the question of Scottish independence, which she said would be “the most important constitutional issue to face any of us in our lifetime.” She argued that England, Wales and Northern Ireland had an “equal right” to make their views known on the matter, because the breakup of the union would “affect all of us.” On the same day in Scotland, Elaine Murray, a Labour Party member of the Scottish parliament, made the case for Scots living outside Scotland to be able to vote. She said it was “hugely unfair” that the franchise would not be extended to Scotland’s expats in other parts of the U.K. and around the world, who number roughly 1 million, or a fifth of Scotland’s population.

Lord Wallace, advocate general for Scotland and former deputy first minister of Scotland, rejected these arguments, despite agreeing that a breakup of the union would be “very grievous.” He insisted that “whether or not Scotland should leave the United Kingdom is a matter for Scotland.” Looking to the U.K. political history for similar cases, Wallace noted that the Northern Ireland sovereignty referendum in 1973 set a precedent for allowing only those residents in one part of the U.K. to vote on that part’s sovereignty.

Bruce Crawford, Scotland’s minister for government strategy, also noted that the principle that referendums should be determined by residency was “internationally accepted.” In fact, only two of 11 referendums in the U.K. since 1973 have involved the whole of the union. Lord Wallace also warned that relationships within the union would suffer if Scotland felt it was being prevented from achieving independence by other parts of the U.K. Christian Allard, a French-born Scottish Nationalist Party member of parliament, told Reuters: “It’s a new kind of nationalism … It is about where you live and where you decide and choose to live and have children and grandchildren.”

Though many outside Scotland may wish they could have a say in the future of the union, the Scottish government chose an electorate with a physical stake in the country’s future. Scotland’s First Minister Alex Salmond has called the referendum “an act of self-determination.” And given the record level 97% of Scotland’s electorate registered to vote, it’s clearly an act the country’s residents are taking very seriously. 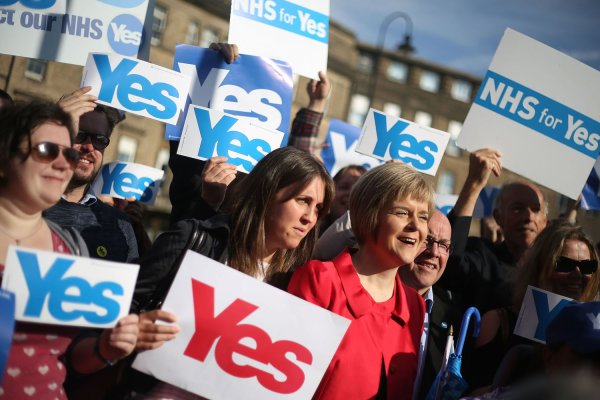