Gold medalist Andy Murray of Great Britain poses after the medal ceremony for the men's singles tennis match at the Olympic Games on Aug. 5, 2012, in London
Professional Sport—Popperfoto/Getty Images
By Per Liljas

As Thursday’s referendum nears, Britons are pondering what an independent Scotland will mean not just in terms of national identity or the economy, but also in an area dear to the hearts of many on either side of the polling divide: sport.

National allegiances in British sports are not straightforward in the first place. The union fields four national football squads — England, Northern Ireland, Scotland and Wales — but they all unite for the Olympics. Golf players compete for their separate countries, but tennis players don’t. Scottish tennis star Andy Murray serves as the clearest example of the complications of this kind of dual identity: enthusiastically embraced as a Briton when he’s on good form (such as in 2013, when he became the first player from the isles to win Wimbledon in 77 years), but referred to distantly as a Scot when he loses.

Now he and other Scottish sports stars may face a difficult choice. Should Scotland opt out of the union, and they go with it, they risk losing out on the benefits of British funding, coaching and facilities. Even if they stay with Team Great Britain, they’ll have a harder time earning the love of English and Welsh fans. A survey by the Mail on Sunday last week found that 11.9% of U.K. responders outside Scotland would already be less likely to cheer for Murray.

The current world No. 12 has long dodged the question of whether he favors Scottish independence, but recently acknowledged that he might swap the Union Jack for the Saltire if Scotland seceded.

“If Scotland became independent, then I imagine I would be playing for Scotland,” the Guardian reports he told reporters on Aug. 28. “It would be pretty much the first time in my life that I would have ever [had the chance to play for Scotland].”

Murray triumphed in the London Olympics 2012, as did Scottish cyclist Chris Hoy, Great Britain’s most successful Olympian of all time. The Associated Press’ John Leicester notes that English coach Dave Brailsford played an instrumental role in each of Hoy’s six Olympic gold campaigns. Hoy has now retired, but other Scottish athletes may have to weigh the possible shortfalls of Scotland’s inexperience in the Olympics.

Scottish athletes currently make up 10.7% of U.K. Sport’s World Class Programme and will continue to receive funding unless they switch sides. Star sailor Luke Patience, for instance, benefits handsomely from the $40 million allotted to sailing at the 2016 Olympics.

However, pro-independence politician Shona Robison, who serves the Scottish government’s minister for sport, argues that Team Scotland would be equally able to accommodate Olympic hopefuls.

“We will make sure that our athletes absolutely receive the support that they require to enable them to compete at the highest level,” she told AP. “We believe very strongly that the prize of being an athlete competing for the first time for Team Scotland in the Olympics and Paralympics will be something that is hard to resist for the vast majority of athletes.”

But if Scotland votes Yes for independence on Thursday, there may still be a lag before its top athletes jump ship. The country’s own IOC vice president, Craig Reedie, has already said the timetable for Scotland to enter the Olympics in Rio de Janeiro in 2016 may be too tight, the Telegraph reports. That will give plenty of anxious athletes more time to make up their minds. 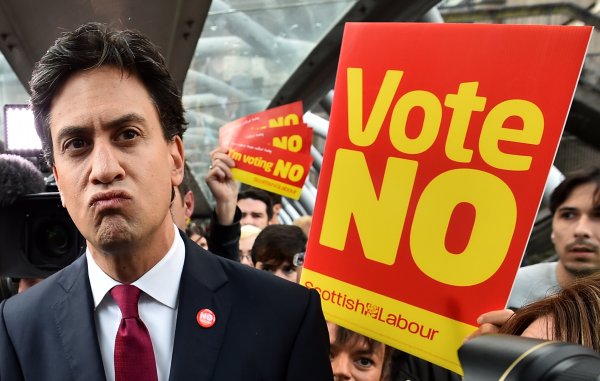