Wynn Gets a Boston-Area Casino License

This file artist's rendering released March 27, 2013 by Wynn Resorts shows a proposed resort casino on the banks of the Mystic River in Everett, Mass.
AP
By Elizabeth Barber

Wynn Resorts has won a license to bring a $1.6 billion casino to Everett, Mass., a Boston-area town with a polluted waterfront and a big bet on gaming to raise its middling fortunes.

The Massachusetts Gaming Commission voted 3 to 1 on Tuesday afternoon to award the sole license available near Boston to the Las Vegas–based gaming giant Wynn Resorts — and not to Mohegan Sun, the Connecticut-based developer that had pitched to build a $1.1 million casino in Revere, another Boston-area town that is seeing tough times.

Both towns had, over the past several months, staged public relations campaigns in which each claimed to be harder-up and less attractive than the other and thus more in need of a casino’s heady injection of jobs and cash.

Meanwhile, the two gaming juggernauts had each wagered that their stimulus package was richer than the others and would lift not just the fortunes of a single town but also plug holes in Massachusetts’ hemorrhaging coffers.

“We will no longer be the butt end of the city of Boston,” he said. “We will be the entrance to the city of Everett.’’

This is the second of three casino licenses to be awarded in the state, after a 2011 law legalized gambling and created three casino licenses, plus one slots-parlor license, which has also been awarded. Contentious battles have flared among big-name casino developers vying over the licenses, as well as between the gaming giants and those in Massachusetts who oppose the state’s use of gaming as a fix for its budget woes.

Casino foes have won the right to hold a statewide referendum on the gaming law in November. Critics say casinos do more harm than good to their municipal hosts, breeding crime and tanking property values, while others worry that the Northeastern market is too saturated and competitive for Massachusetts’ proposed casinos to generate the tax bounties they are touting.

MGM Resorts International, which won the first casino license, in Springfield, is holding off on building its complex until voters go to the polls, but the winner of the slots license, Penn National Gaming, is going ahead. Early polls on the referendum have been divided.

Wynn claims its casino will create more than 4,000 permanent jobs, plus about 3,000 construction jobs, and it has pledged Everett about $30 million in local enhancement projects and $45 million in traffic improvements. It has projected that its casino would haul in annual revenue of $800 million a year, more than $200 million of which would go to the state as gaming tax. 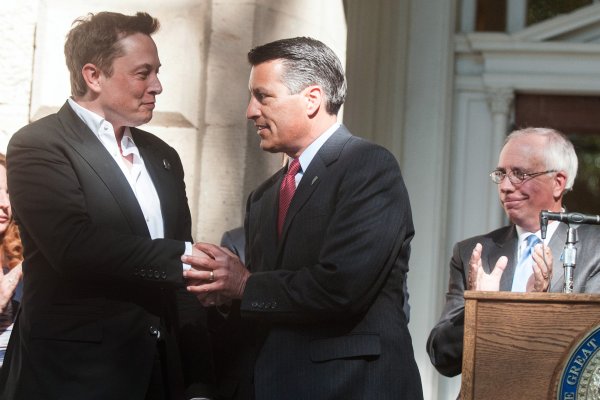 Tesla Awards 'Gigafactory' Deal to Nevada
Next Up: Editor's Pick