The One Who Knocks really knocks one out of the park in a new commercial for Major League Baseball–which features Breaking Bad star Bryan Cranston touting an epic Looney Toons-inspired one man show about the sport.

“I felt it was just time for me to get back to the basics by diving right into my great passion: baseball,” Cranston says, over a puffed up dramatic musical score.

In a faux behind-the-scenes vignette, he describes this supposedly self-funded passion project: “Then it hit me: why not dramatize the entire MLB postseason? It would be my greatest acting challenge.”

Cranston (who is on a roll, guys) will—in the imagined universe of the mini-mockumentary—act out all your favorite moments in baseball all by himself. He’ll come up to bat, he’ll get a pie smashed in his face, he’ll talk in a dramatic voice about the mystique of the game. There will be ballet (he even gets dance lessons from Misty Copeland, in a delightful cameo appearance by the American Ballet Theatre dancer). There will be spoken word renditions of classic songs dripping with gravitas.

“Any actor that tells you that he is not inspired by Bugs Bunny is a liar, frankly,” he says. “Or just a hack.”

After watching this glorious piece, who does not want to make this fake one-man show a reality? We’ll just go ahead and get those Change.org petitions and Kickstarter accounts started now. 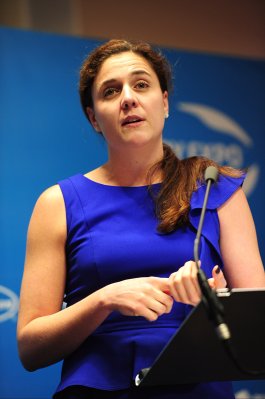 New York Mets Official 'Fired for Being Pregnant and Unwed'
Next Up: Editor's Pick