A 16-year-old transgender girl, who attracted national attention when she was imprisoned without criminal charges, was found on Tuesday, hours after she escaped during her first day at a private treatment facility in Hartford, Conn., state officials said.

The teenager, who has been referred to by the Department of Children and Families (DCF) as “Jane Doe” due to her age, had escaped around 11:45 a.m. EST, and was found in Hartford shortly before 4 p.m. EST, local police told NBC Connecticut.

In April, the teen’s case sparked rallies by transgender advocates and other supporters when a judge ordered her to be sent to a women’s prison without criminal charges, citing that the DCF said she was too violent to remain in their custody.

Since then, she has shuffled between facilities nearly once every month. In May, she landed in a mental health unit in East Lyme, Conn., where activists claimed that she was being held in solitary confinement–a punishment often cited for its negative psychological impact. The DCF has denied these claims, Fox News reports.

In June, Jane Doe was moved to a psychiatric center in Middletown, Conn., and in July, she was transferred to Connecticut’s Juvenile Training School, the state’s only facility for delinquent boys, where she was held most recently. Her alleged assault on a staff member prompted the DCF to issue another transfer to the privately run treatment facility.

Advocacy groups like GLAAD, which has not yet released a statement about the teen’s escape, have since continued to demand better treatment for Jane Doe.

“It’s heartbreaking to learn that this young girl is still being shuffled around the system and misgendered by those who are charged with taking care of her,” GLAAD Senior Media Strategist Tiq Milan said in July. “She deserves the basic right of being acknowledged and respected as the gender she identifies with before any forward progress can actually happen.” 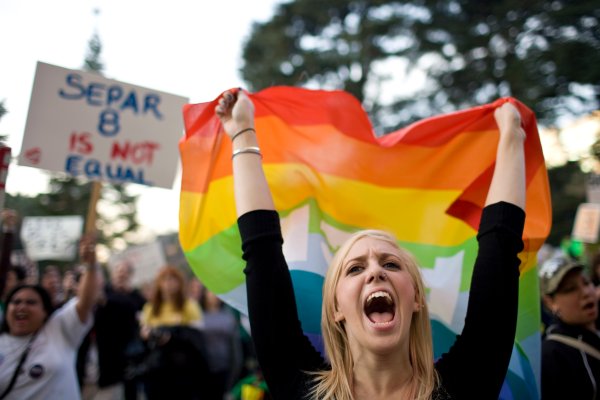 The Fight's Not Over: Gay People Need to Voice Our Rage
Next Up: Editor's Pick