Netflix Has a Plan to Take Over the World

Kevin Spacey talks about the new season of "House of Cards" on Good Morning America, 2/18/14, airing on the ABC Television Network.
Ida Mae Astute—ABC via Getty Images
By Victor Luckerson

Like the conniving Frank Underwood, Netflix’s ambitions only continue to grow.

The streaming service is rolling out in six new European countries this week, including France and Germany, two of the region’s largest markets. The expansion, Netflix’s biggest ever, will expose the company to hundreds of millions of potential new customers who have high-speed Internet access. But the challenges and costs of adapting a U.S.-based service for six different cultures won’t be easy—or profitable—for quite a while.

At home, Netflix is still growing at a healthy clip. The company added 2.82 million streaming subscribers in the first half of 2014, up from 2.66 million additions during the same period last year. But the growth rate abroad is even faster as Netflix continues to come online in more regions. The company added 2.87 million international customers in the first half of the year, compared to 1.63 million last year. It’s projecting that it will add 2.36 million international subscribers in the third quarter alone thanks to the new markets where the service is launching.

While opening in new markets will certainly boost Netflix’s subscriber base, there’s no guarantee the service will perform as well as it has in the United States or the United Kingdom. In Germany, TV is less popular than in other Western nations. Germans watch 230 minutes of TV and video content per person per day, compared to 286 minutes per person in the U.S., according to research firm IHS. And the TV they do watch isn’t necessarily the same as what succeeds elsewhere. Seinfeld was famously a bust in Germany because it was “too American.” More worryingly for Netflix, its own high-budget original show House of Cards failed to net even a million viewers when it debuted on the German network Sat. 1, according to Bloomberg. Episodes from season two averaged less than 100,000 viewers.

“The Germans notoriously have different tastes from the rest of the West,” says Michael Pachter, an equity analyst for Wedbush Secutiries. “All of us . . . make the mistake of thinking that ‘international’ is a place. International is 180 independent, different nations.”

While there are similar cultural concerns in France, there Netflix must also deal with entrenched competitors who want to squash the streaming service before it can gain traction. Canal Plus, France’s largest pay-TV provider, actually owns the broadcast rights to House of Cards and recently announced a deal to stream HBO shows through its own Netflix-like service, Canalplay. Another provider, Numbericable, launched an online service with access to 3,000 episodes of TV shows on the same day Netflix launched in France. Meanwhile, content creators and regulators worry Netflix will try to further Americanize French culture while avoiding paying large taxes because it’s headquartered outside the country.

“People are concerned the emergence of Netflix will damage the local content industry,” says Richard Broughton, an IHS analyst. “They really have to make some partnerships in order to make better headway into the French market.”

Netflix has plans to address these issues. A new House of Cards-like drama called Marseille is set in the south of France and will be helmed by French directors. It should help cast Netflix as a collaborator in the country rather than an invader. The company will also try to buy up streaming rights to locally produced shows in the new countries where it launches, Broughton says. The strategy has been effective in the United Kingdom, where Netflix has the rights for many BBC shows. The company has 3 million customers there, according to one estimate.

But building a curated library for each individual market is expensive, and Netflix often has to negotiate individual rights agreements for each different country where it operates. “They have to replicate the wheel every place they go,” Pachter says.

That’s why Netflix’s international business has been unprofitable since it began. The division lost $15 million in the most recent quarter, and Netflix projects that loss will balloon to $42 million in the third quarter due to marketing and licensing costs in new territories. The price to compete will only grow, especially when other U.S. competitors show up in Europe (Amazon Prime Instant Video is already available in Germany).

Early impressions indicate that Netflix’s library of titles in France is not as robust as in the U.S. But analysts expect the company will eventually work out the kinks. IHS projects that Netflix will have 18 million subscribers across Europe by 2018, up from 5.8 million today. That would be a boon for the world’s most popular streaming service, but it’s hardly guaranteed.

“You’ve got to spend an awful lot up front,” Broughton says. “You’re gambling on, over the next few years, being able to accrue sufficient subscribers to offset those costs.” 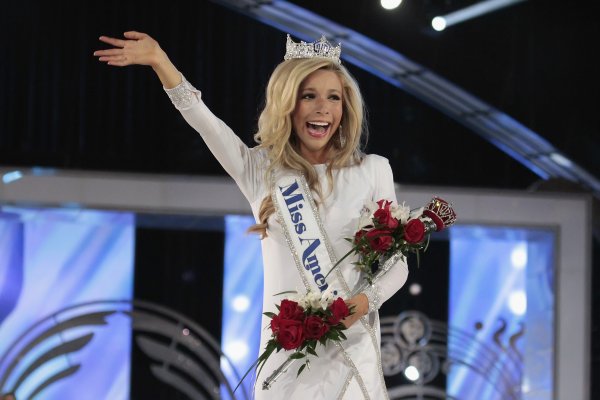 Everyone Needs to Lay Off the Miss America Contestants
Next Up: Editor's Pick