British Politicians Make Final Push to Save Union With Scotland

Supporters wave British and Scottish flags at a pro-union rally, at Trafalgar Square in central London on Sept. 15, 2014
Lefteris Pitarakis—AP
By Per Liljas

Prime Minister David Cameron urged Scottish voters Monday not to let their dissatisfaction with his government lead them to opt out of the U.K.

“Please don’t think: ‘I’m frustrated with politics right now, so I’ll walk out the door and never come back,” he said, according to the Guardian. “If you don’t like me — I won’t be here forever. If you don’t like this government — it won’t last forever. But if you leave the U.K. — that will be forever.” He was making an emotive address in the Scottish town of Aberdeen.

British politicians are currently making a final push to save the 307-year-old union, as Thursday’s referendum on Scottish independence looms. Scots are almost evenly divided between the Yes and No camps, polls show.

Cameron’s voice was close to breaking as he declared that he would be “utterly heartbroken” by a Yes.

His Tory party has been shunned in Scotland since the days of Margaret Thatcher — a fact that Cameron’s political opponent Ed Miliband, leader of the Labour Party, is expected to exploit when he arrives in Scotland Tuesday. For Miliband, this is also a chance to score points for a U.K. parliamentary shift in 2015.

“The will of the people of Scotland for economic and political change has been heard and we will deliver,” he will tell a rally, according to the Guardian.

Prime Minister Cameron has described the possible breakup as a “painful divorce,” but in the same vein the unionist motto, “Better together,” has been trashed by English Last Week Tonight comedian John Oliver, who compared it to “what people say to convince themselves to stay in a dead marriage.”

For a tongue-in-cheek explanation of the issues behind Thursday’s vote, check out Oliver’s video. 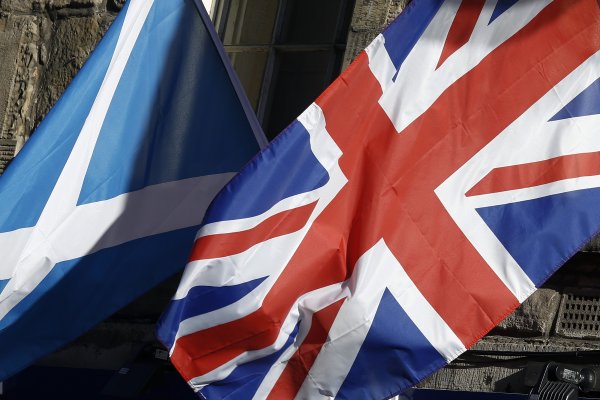 Cast Your Vote on Whether Scotland Should Be an Independent Country
Next Up: Editor's Pick