When George’s owners noticed that he’d become very sick, they rushed their beloved pet to the vet for a check-up. That’s when George was diagnosed with a life-threatening tumor, and was recommended by the vet to undergo a unique surgery.

Except George is goldfish. And not just any goldfish: one that’s already 10-years old. While most owners would’ve said their goodbyes and flushed George down the toilet, his owners shelled out $200 for a vet at the Lort Smith Animal Hospital in Melbourne, Australia, to perform the rare surgery, according to the New York Post.

Very little of the hospital’s surgical practice is fish-specific, Dr. Tristan Rich, an exotic wildlife specialist who performed George’s surgery, told Daily Mail. George was first placed in a bucket of water that contained an anesthetic, according to the hospital’s Facebook. While excising the tumor, which had grown into his skull, Dr. Rich fed a tube containing water, oxygen and anesthetic into George’s gills, so that the goldfish would remain unconscious and alive.

At the end of the operation, Dr. Rich ran into a bit of trouble. The sutures didn’t hold, so instead he used tissue glue—something that’s normally used in human operations. Finally, Dr. Rich gave George antibiotics and painkillers, and placed him in a recovery bucket of clean water. Soon after the 45 minute operation, George started swimming and breathing on his own.

“For the owners, it’s not about having a fish, it’s about having this fish,” Dr. Rich told Daily Mail. “If you have a pet, regardless of what it is, then you have a responsibility to look after it as best you can.” 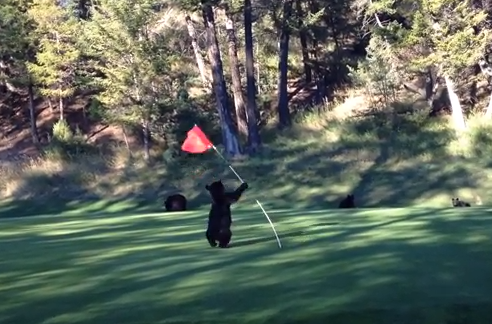 Watch an Adorable Bear Cub Dance on a Golf Course
Next Up: Editor's Pick