Robin Thicke arrives on the red carpet for the 56th Grammy Awards in Los Angeles on Jan. 26, 2014
Robyn Beck—AFP/Getty Images
By Charlotte Alter

Robin Thicke admitted in court that he didn’t really help write the 2013 smash “Blurred Lines” — in part because he was high on the painkiller Vicodin when the song was being written.

Instead, Thicke testified, it was producer Pharrell Williams who really wrote the song. The testimony was taken from depositions Thicke and Williams made in April as part of an ongoing legal dispute with the children of Marvin Gaye over whether or not “Blurred Lines” lifted beats and rhythms from Gaye’s 1977 song “Got to Give It Up.”

Here’s how Thicke said he contributed to the writing of the song, from depositions obtained by the Hollywood Reporter:

Williams said he was “in the driver’s seat” for this song, but explained that sharing credit is the norm for the music industry. “You know, people are made to look like they have much more authorship in the situation than they actually do. So that’s where the embellishment comes in.” When asked whose words were used in the lyrics, Williams answered: “Mine.”

Williams also said that it’s “Robin Thicke’s voice” that makes the song great: “Because it’s the white man singing soulfully and we, unfortunately, in this country don’t get enough — we don’t get to hear that as often, so we get excited by it when the mainstream gives that a shot.”

Thicke also admitted he lied to media outlets about the genesis of the song, like when he described the creative process to GQ: “Pharrell and I were in the studio and I told him that one of my favorite songs of all time was Marvin Gaye’s ‘Got to Give It Up.’ I was like, ‘Damn, we should make something like that, something with that groove.’ Then he started playing a little something and we literally wrote the song in about a half hour and recorded it.”

As for why, exactly, he lied, Thicke says that he “had a drug and alcohol problem for the year” and “didn’t do a sober interview.” 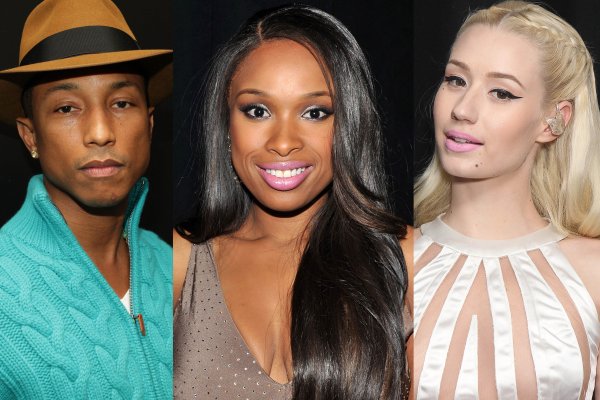 Jennifer Hudson Teams Up With Pharrell and Iggy Azalea on "He Ain't Going Nowhere": Listen
Next Up: Editor's Pick