Vivienne Westwood knows how to make a statement.

The English fashion designer and notorious rabble-rouser showed off her support for Scottish independence ahead of this week’s referendum on secession from the United Kingdom during the fashion show for her Red Label S/S collection on Sunday at London’s Fashion Week.

The 73-year-old designer didn’t just have her models walk the catwalk wearing “Yes” badges — which is the motto for the independence campaign — but she also left notes explaining her views on every seat in the venue.

Westwood first revealed her pro-independence stance in a video, called “Vivienne Says Yes,” on her official website a few weeks ago:

But after her show on Sunday, Westwood expanded on her view to reporters, saying that despite being English herself, she “hate[s] England” and is “very unpatriotic about England because it is being completely ruined.”

While many famous Scots have weighed in with their views on whether the country should break the 307-year-old union with England, Wales and Northern Ireland — including Sean Connery, Ewan McGregor and Gerard Butler — Westwood is perhaps the most prominent English voice to champion Scotland’s independence.

Of course, this isn’t the first time Westwood has waded into politics. One year she sent her models down the catwalk bearing signs denouncing the treatment of prisoners at Guantanamo Bay. She has also protested against fracking and climate change and has publicly supported both Wikileaks founder Julian Assange and former U.S. soldier turned national secret leaker Chelsea Manning.

Yet Westwood, who launched her fashion career in London in the 1970s, has long been influenced by Scotland. Her designs have often included tartan and she even created her own pattern and clan, called the “Westwood MacAndreas,” for her 1993 A/W collection. The tartan was even officially registered by Scotland.

Despite her enthusiastic support, Westwood also said she would not be moving her business to an independent Scotland. “I’ve got 200 people working for me, I just can’t relocate just like that,” she told Reuters. “I will just have to keep making lots of tartan and use the Scottish mills.” 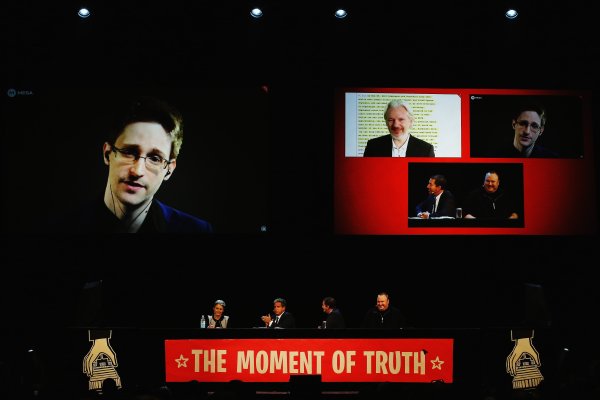