Representatives from across the Middle East and Western nations are convening Monday in Paris, where an emerging coalition will begin formulating a strategy to combat the Islamic State of Iraq and Greater Syria (ISIS).

Before flying to France on Sunday, U.S. Secretary of State John Kerry canvassed American allies in the Middle East, aiming to rustle up support for military operations targeting the extremist Islamist group that continues to hold sway over large areas of eastern Syria and northwestern Iraq.

“I can tell you right here and now that we have countries in this region, countries outside of this region, in addition to the United States, all of whom are prepared to engage in military assistance, in actual strikes, if that is what it requires,” Kerry told CBS’s Face the Nation from Cairo on Sunday.

Kerry’s interview appeared to be part of an all-out media blitz by the Obama Administration following the U.S. President’s pledge last Wednesday to “degrade and ultimately destroy” ISIS.

However, after issuing plenty of tough talk earlier this week, the White House has continued to remain adamant that no major deployment of U.S. combat troops will be used against the radical Sunni militants on the ground.

Instead, the Administration hopes to recruit and bolster Sunni proxy forces in the Middle East, including opposition groups currently fighting inside Syria.

“Ultimately, to destroy [ISIS], we do need to have a force, an anvil against which they will be pushed, ideally Sunni forces,” White House chief of staff Denis McDonough said during an interview on CNN’s State of the Union on Sunday. This was the thinking, he said, behind the “proposal that the President has sent to Congress to authorize us to train and equip the Syrian opposition that’s on the ground fighting [ISIS] today.”

During an address on Sunday, President Barack Obama called for “a targeted, relentless counterterrorism campaign against [ISIS] that combines American airpower, contributions from allies and partners, and more support to forces that are fighting these terrorists on the ground.”

However, the President’s critics in Congress blasted the White House for failing to mobilize the necessary force to confront ISIS.

“You cannot create an army to destroy [ISIS] without an American component,” said Senator Lindsey Graham during an interview on Fox News. “This is war.”

Following the release of the video, U.K. Prime Minister David Cameron condemned the murder of Haines — calling ISIS the “embodiment of evil.” Cameron went on to vow to “hunt down those responsible and bring them to justice, no matter how long it takes.” 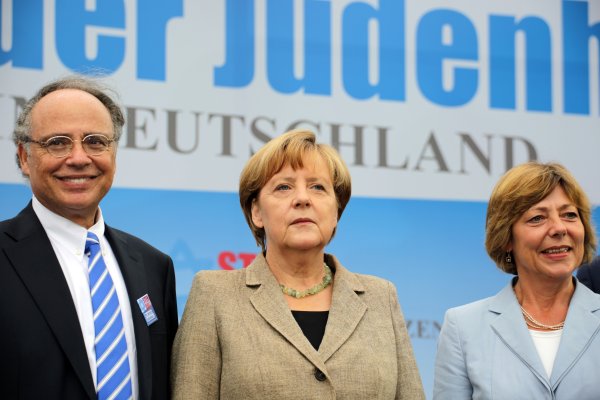 German Chancellor Vows to Fight Surge in Anti-Semitism
Next Up: Editor's Pick