Duncan Thomson, Brian McCutcheon, John Patterson and Arthur Murdoch,from King of Scots Robert the Bruce Society, hold the Scottish flags as they prepare to vote in the Scottish independence referendum on Sept. 14, 2014 in Loch Lomond, Scotland.
Jeff J. Mitchell—Getty Images
By Per Liljas

The Scottish campaign trail is going into overdrive with only three days remaining before the country’s voters decide whether to split from or remain part of the U.K.

Hundreds of pro-independence protesters marched on BBC’s Scottish headquarters on Sunday, the Guardian reports, denouncing the broadcaster’s alleged pro-U.K. “bias” and “lies” in its coverage of the vote.

The sharpened tone comes as recent polls separate the independence and unionist sides by a mere couple of percentage points, and as leaders prepare frantic last efforts to woo the few hundred thousands of votes necessary to clinch victory. Both Scotland’s First Minister Alex Salmond and U.K. Prime Minister David Cameron are due to deliver major speeches in Scotland this week, emphasizing the benefits of a Yes and a No vote respectively.

Salmond and his Scottish National Party have been working toward a referendum since 2007.

“In my opinion, and it is just my opinion, this is a once-in-a-generation opportunity for Scotland,” Salmond said in a Sunday interview on BBC. He added that he would view No votes as “deferred yeses” and maintained that Scotland will “eventually” achieve independence even if his side lost on Thursday.

In contrast to earlier campaigning, which focused on the purported social and economic consequences of either a Yes or No vote, recent appeals have been made at the heart.

Last week, Prime Minister Cameron pleaded, “We desperately want you to stay; we do not want this family of nations to be ripped apart,” while this weekend former England football captain David Beckham argued that the bond between the two nations was “the envy of the world.”

Former James Bond actor Sean Connery, on the other hand, has said that independence could spur artistic and creative growth in his native Scotland, and at a Sunday concert in Edinburgh’s Usher Hall, celebrated Scottish acts joined forces to infuse energy into the Yes campaign.

“I’m a man of few words,” singer Alex Kapranos, of renowned rock band Franz Ferdinand, told an exuberant crowd, according to the Herald. “Tonight I’m a man of one word, and that word is ‘yes.’”

Elsewhere, about a thousand protesters gathered at the city’s main cricket ground, Grange Cricket Club, to form a giant No that was photographed from the air.

Thursday will decide which of the two will prevail. 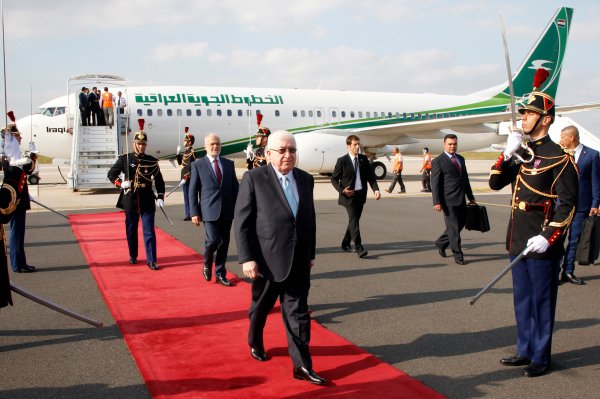 Anti-ISIS Coalition Converges in Paris for Strategy Meeting
Next Up: Editor's Pick