Here's the Best Way to Get Someone to Quit Smoking

For years, the U.S. government has gone back and forth about whether or not it’s legal to force tobacco companies to use images of cancerous lungs and other graphic pictures on their cigarette packaging. The assumption, of course, is that the images will terrify any smoker into kicking the habit.

However, a new study published in the journal Nicotine & Tobacco Research shows that the graphic tactic might not work on all smokers. The effectiveness of antismoking messaging depends on the attitude of the smoker.

Researchers from the Georgetown Lombardi Comprehensive Cancer Center studied 740 smokers to figure out what type of antismoking campaigns worked best. They discovered that messages that stress the benefits of quitting, like “quitting smoking reduces the risk of death due to tobacco,” were more effective at getting smokers to quit if those smokers thought that quitting would be very hard. The more graphic and negative ads like “smoking can kill you” tended to work best for smokers who thought they could quit whenever they wanted.

One of the reasons motivating messaging worked best among smokers who viewed quitting as a challenge could be that they’re already well aware of the health risks. On the other hand, the researchers speculate that loss-framed messaging — the kind that focuses on the negative consequences of continuing a behavior — worked better for smokers who felt they had more agency in their cessation because the negative ads built up motivation to stop.

Ultimately, the researchers believe that having a mixture of various messaging strategies is the best way to appeal to a broad range of smokers, and that currently there are far more negative messages than positive ones.

That’s not to say that scary ads don’t work. For a couple years, the Centers for Disease Control and Prevention (CDC) has poured resources into an intensive ad campaign called “Tips From Former Smokers” which features real former smokers who have experienced serious setbacks from their habit, like no longer being able to speak properly or having a baby too early. During past campaigns, the CDC has said that their quit lines experience 80% more activity when the ads are running compared with the weeks before.

Terrifying ads aren’t going away anytime soon, but mixing in more motivating messages might appeal to would-be quitters of all kinds. 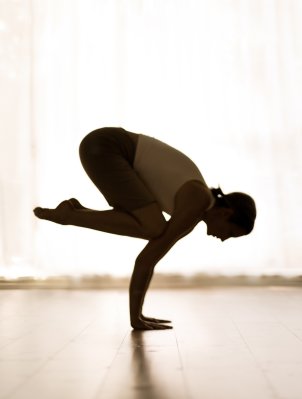 3 Ways to Beat the Sunday Blues With Yoga
Next Up: Editor's Pick