NFL commissioner Roger Goodell walks the sidelines prior to the game between the Seattle Seahawks and the Green Bay Packers at CenturyLink Field in Seattle on Sept. 4, 2014
Otto Greule Jr—Getty Images
By Nolan Feeney

National Football League commissioner Roger Goodell is facing mounting calls for his resignation amid the league’s handling of a recently published video tape of Ray Rice, which shows the Baltimore Ravens running back knocking his fiancée unconscious in an elevator.

Rice was given a two-game suspension in July for violating the league’s personal-conduct policy after he was arrested on charges related to domestic violence for the incident. In August, Goodell apologized for the leniency of the punishment and announced stricter punishments for abusers, but two events put him back in the hot seat last week: first, security footage of the actual assault that surfaced on TMZ; and second, an Associated Press report that law enforcement had sent the footage to the NFL the footage five months ago. Goodell has said that nobody in the organization saw the video footage until last week.

But women’s groups have mounted a growing campaign for Goodell’s resignation. UltraViolet, a women’s-rights organization, announced plans to fly planes with banners featuring the message “#GoodellMustGo” over three different NFL stadiums on Sunday, Bloomberg News reports. The planes are expected fly for two hours over stadiums in San Francisco, Cleveland and East Rutherford, N.J., before the facilities’ no-fly-zone rules kick in an hour before games begin. Another plane is scheduled to fly over a stadium in Indianapolis on Monday ahead of another NFL game there that night.

Terry O’Neill, the president of the National Organization for Women, said in a statement earlier in the week that Goodell’s resignation was the only solution for the league to “transform the culture of violence against women that pervades the NFL,” citing the San Francisco 49ers’ Ray McDonald (arrested in August on felony domestic-violence charges) and the Carolina Panthers’ Greg Hardy (arrested in May for assaulting an ex-girlfriend) as other examples. Hardy had been due to play for the Panthers Sunday, but was placed on the inactive list shortly before the game.

“The NFL sets the example for college, high school, middle school and even elementary school football programs,” O’Neill said in a statement, according to ESPN. “And the example it is setting right now is simply unacceptable. New leadership must come in with a specific charge to transform the culture of violence against women that pervades the NFL. That’s the only way to restore honor and integrity to the country’s most lucrative and popular pastime.”

The hashtag #GoodellMustGo has also taken off on Twitter, where an advertisement for CoverGirl’s NFL line with the slogan “Get your game face on!” was modified to show a model with a black eye, USA Today reports, and widely shared.

John Mara, the president and CEO of the New York Giants, said in a supportive statement Wednesday that Goodell took responsibility for Rice’s initial two-game suspension and had made a positive change in the league: “Our policy now on domestic violence has been strengthened. We have all learned a valuable lesson from this episode. We now have a strong partnership with anti-domestic violence groups, and we will be a better league for it going forward.” He also said the NFL had made “repeated requests” to obtain the video footage and had been denied.

Goodell previously told CBS that he did not believe he would lose his job over the incident, saying he was “used to criticism.” He did, however, agree that that the league had a domestic-violence problem because, in his words, “one case is too many.”

“Every day, I have to, to do a better job,” Goodell said. “And that’s my responsibility to the game, to the NFL and to what I see as society.” 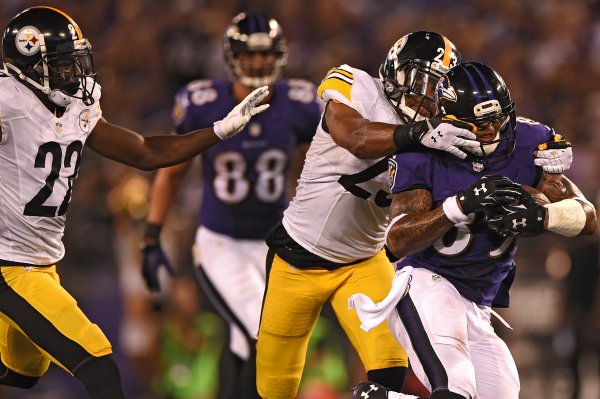