U.S. and Russia in Mockery Arms Race Over Sanctions

The tit-for-tat battle of sanctions between the United States and Russia this week has been met by a merry-go-round of bravado and mockery.

After the White House threw down more sanctions Thursday on those close to Russian President Vladimir Putin for his country’s annexation of the breakaway Crimea region from Ukraine, Russia reciprocated by banning nine American senators, congressmen and White House officials from the country. What has followed can best be called a game of collective thumb-nosing.

Of the six members of Congress sanctioned, Indiana Republican Sen. Dan Coats took the cake for the most inventive response, taking to Twitter on Friday with a Letterman-like Top 10 countdown.

“I won’t be able to complete my granddaughter’s Russian doll collection,” he wrote at No. 10. “Our summer vacation in Siberia is a no go.”

Others took the chance to boast of their spot on the sanctions list. Louisiana Democratic Sen. Mary Landrieu called being sanctioned a “badge of honor.” House Speaker John Boehner was “proud” to be on the list, according to a spokesman, as were the rest—Senate Majority Leader Harry Reid, Arizona Republican Sen. John McCain and New Jersey Democratic Sen. Bob Menendez.

“Putin’s move is nothing compared to the time @pfeiffer44 and @rhodes44 were kicked out of Russia House,” joked former Obama speechwriter Jon Favreau on Twitter, referring to the Dupont Circle bar that Washington Capitals star Alex Ovehckin has been known to frequent.

“Now that you’ve been banned from Russia, why not come out & catch a @chicagobulls game?” wrote former Obama senior advisor David Alexrod on Twitter. “@RahmEmanuel guarantees you entry!”

The U.S. sanctions will surely have some impact while Russia’s will mean little-to-nothing given the former’s primacy as a hub for global finance—as McCain joked, “I guess this means my spring break in Siberia is off, Gazprom stock is lost & secret bank account in Moscow is frozen.”

But officials targeted in Russia have taken it with equal aplomb. “All these sanctions aren’t worth a grain of sand of the Crimean land that returned to Russia,” Dmitry Rogozin, Russia’s Deputy Prime Minister, wrote on Twitter. Vladislav Surkov, a close aide to Putin, said on Tuesday after the first, weaker round of sanctions that “I consider this a kind of political Oscar from America for best male supporting role,” according to Reuters. “The only things that interest me in the US are Tupac Shakur, Allen Ginsberg, and Jackson Pollock. I don’t need a visa to access their work. I lose nothing.”

Standard & Poor’s downgraded Russia’s credit rating on Thursday, and Russian stocks fell in the wake of the sanctions. Visa and MasterCard have stopped stopped processing payments by cardholders at Russian banks targeted by the sanctions. On Friday, Putin joked he would open an account on Monday at Rossiya Bank—one of the banks targeted by the U.S. sanctions and the credit card companies. 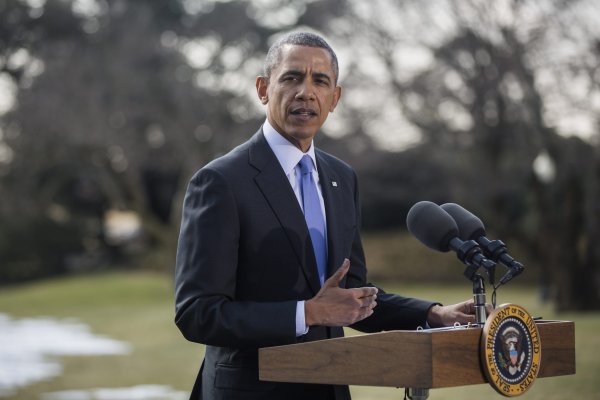 Obama and Putin Trade Sanctions Over Crimea
Next Up: Editor's Pick