Sixty-nine years after one of the bloodiest battles of World War II was fought on this tiny island, a new conflict is underway – how to remember Japan’s role in the war.

“I am deeply concerned that the memory of the battle of Iwo Jima is gradually fading,” says Tetsuro Teramoto, whose father was among the more than 21,000 Japanese soldiers who perished in the fighting. More than 6,000 U.S. Marines died there, as well, and another 20,000 were wounded.

“We have a responsibility to devote ourselves to passing our memories to the following generations in order not to repeat such a tragedy,” said Teramoto, who heads a support organization for families of the war dead. Teramoto was not yet born when his father was killed by the Marines.

Nationalist Prime Minister Shinzo Abe sparked bitter criticism last year when he visited the controversial Yasukuni Shrine, where 14 Class A war criminals – wartime leaders — are enshrined along with more than two million other Japanese war dead. A museum associated with the shrine teaches that the United States tricked Japan into starting the war; that atrocities like the infamous Nanking Massacre never occurred; and that Japan fought to liberate its neighbors from Western colonialism, as opposed to establishing its own empire.

That does not sit well with many of 250 Japanese and American veterans, family members and supporters who gathered here this week to honor those who fought and died on both sides.

“That’s hogwash. They attacked Pearl Harbor. They started it and they know it. But it’s over now. We should let bygones be bygones,” says Bob Hensley, 89, a Marine rifleman who was assigned to collecting bodies during the 37 days of brutal fighting.

“We should never forget that the peace and prosperity we enjoy today is built on the sacrifice of these soldiers. For Japan to move to the (political) right absolutely is not acceptable,” says Teramoto.

Iwo Jima – now Ioto – was the first battle fought on Japanese soil. The Americans wanted the island as a fighter base and emergency landing site for B-29 bombers attacking the Japanese mainland.

Defenders were prepared to fight to the death. They spent nearly a year building an intricate system of reinforced bunkers, connected by 11 miles of tunnels and caves. They survived a three-day naval barrage nearly unscathed and poured murderous fire on Marines who had to slog through deep black sand into the teeth of Japanese defenses. Of the entire garrison, only 210 Japanese soldiers survived.

The battle produced the iconic photo of Marines raising the flag over Mt. Suribachi. And it inspired a pair of acclaimed 2006 movies by director Clint Eastwood – Flags of Our Fathers and Letters from Iwo Jima, which told the story from the American and Japanese perspectives.

Among the Japanese delegation to this week’s ceremonies were two dozen members of parliament from the Japanese Diet. They included members of Abe’s own Liberal Democratic Party, nearly all staunch defenders of Japan’s pacifist Constitution. Abe, a strong supporter of the U.S.-Japan defense alliance, wants to boost defense spending, ease restraints on Japan’s self-defense forces and promote a more “patriotic” view of Japanese history. Abe has acknowledged being strongly influenced by his grandfather, Nobusuke Kishi, who was a member of Japan’s wartime Cabinet and was arrested on suspicion of war crimes. Kishi was released without charges and later served as prime minister.

Grant Newsham, a senior research fellow at the Japan Forum for Strategic Studies, in Tokyo, and a former Marine Corps liaison with the Japan Ground Self Defense Force, says that Abe’s rightist views are not shared by the majority of Japanese society. “Abe and a slice of Japan’s ruling class believe Japan did a noble deed with its war to throw off the white man’s yoke in Asia… But is Japan becoming more militaristic? No, I don’t see it,” Newsham said at a recent forum in Tokyo.

And that’s fine with Bob Hensley. “When we were here, we hated them and they hated us, and we were trying to kill each other. But that’s changed,” says Hensley. “We’ve been friends a long time and I hope it stays that way.” 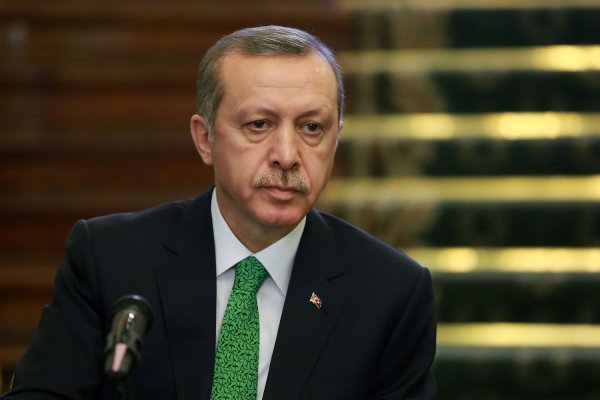