China holds the largest reserves of shale gas in the world, but much of it may never get developed because of one major obstacle: water scarcity.

A new report from the World Resources Institute (WRI) says China suffers from high water stress, which may prevent it from ever fully developing its vast shale gas resources. China is sitting on 1,115 trillion cubic feet of technically recoverable shale gas resources, according to the U.S. Energy Information Administration, but much of it is located in arid areas of the country.

This presents an acute problem for a country that may see its natural gas consumption more than triple over the next 25 years.

China has not yet succeeded in producing its shale gas resources on a large scale, but the central government is putting a lot of effort into developing the expertise needed to economically extract natural gas. For several years now it has invested in North American shale gas companies, such as China National Offshore Oil Corporation’s (CNOOC) $2.1 billion investment in Chesapeake Energy back in 2010. A few months later, PetroChina spent $5.4 billion for a stake in Encana, a large shale gas producer in Canada.

Both moves were seen less as a financial investment and more as an effort to learn the secrets of the North American shale gas revolution.

To be sure, exploration in China is already underway. Much of the drilling thus far has taken place in the Sichuan basin in central China, with over 100 wells drilled to date. WRI says that Sichuan basin is in an area experiencing “medium to high” water stress.

Worse, nearly the entire extent of the Tarim basin, another promising shale gas region in the northwestern province of Xinjiang, suffers from “extremely high” water stress. The dusty region has groundwater shortages, and many of its feeble rivers dry up during certain times of the year.

Drilling and developing shale gas requires massive amounts of fresh water. In Pennsylvania, for example, an average shale gas well can use 4.4 million gallons of waterduring the drilling process, or the equivalent to the daily water consumption of 11,000 American families. That is not necessarily a problem in wet areas, but the effect is much worse in drier areas.

In China, over 60 percent of its shale gas reserves are located in areas suffering from “high to extremely high” water stress. That could cause tension with communities or other businesses that are also in need of water. “High levels of competition among agricultural, domestic, and industrial water users could represent higher costs, reputational risks, and increased regulatory uncertainty for operators trying to access water for hydraulic fracturing and drilling operations,” WRI says in its report, as a warning to businesses seeking to operate in China.

And it is not just China grappling with this conundrum – it just happens to have the most shale gas and some of the worst water problems. WRI conducted a worldwide assessment and ranked countries based on their shale reserves and vulnerability to water scarcity. Mexico and South Africa stand out as two other countries that could see water shortages delay or derail the development of their shale resources.

Mexico has 545 trillion cubic feet of shale gas, a little less than the 665 tcf found in the United States. But most of Mexico’s shale gas is located in the deserts in the northern part of the country, just south of the Eagle Ford shale in Texas. For anyone who has visited northern Mexico, they know that water is scarce. Just 4 percent of annual rainfall in Mexico hits the north. The Burgos basin, Mexico’s most promising, is in an “extremely stressed” water area, with much of its aquifer depleted.

South Africa faces similar constraints. It has one large shale play, over 75 percent of which is located in a region suffering from “extreme” water stress. As is true in most places, the vast majority of water is used for agricultural purposes, so the development of shale gas in South Africa would likely mean diverting water from other uses.

Worldwide, around 38 percent of shale gas reserves are located in areas dealing with “high” or “extremely high” water stress. The natural gas reserves may exist, and could be technically recoverable, but if there isn’t enough water available, the gas may stay in the ground. 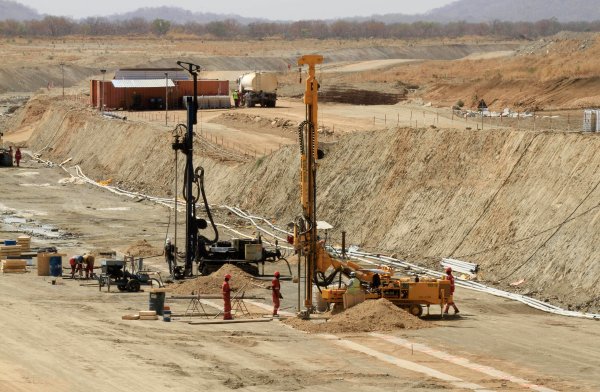 Africa and Belgium Generate the Same Amount of Electricity – But That’s Changing
Next Up: Editor's Pick