In Praise of Emoticons :-)

There are certain things so ubiquitous—things we all have used and enjoyed like we share equal ownership over them—that it is hard to imagine any single mortal person creating them. Things like this:

But the emoticon, that display of feeling crafted from punctuation, does have a birth story, and it unfolded exactly 32 years ago today, on Sept. 19, 1982.

Scott Fahlman, a computer scientist at Carnegie Mellon, noticed that conversations were going awry on electronic message boards the staff was using to communicate in the early 1980s. Jokes were being lost, tones were being misconstrued and unnecessary tirades were eclipsing the intended discussions. So Fahlman, then in his early 30s, made a simple, legendary suggestion: if you’re being humorous or ironic, label your comment with a smiley face made of a colon, dash and parenthesis.

Soon emoticons were spreading to other universities, then seeping into emails and eventually text messages across the world, filling the giant hole left by all the visual cues present only in face-to-face communication. The tone of one’s voice, the furrowing of one’s brow, the erect middle finger. “One of the main problems with text communication is that it’s just different from how we’ve talked to each other for most of the existence of language,” says computational linguist Tyler Schnoebelen, who wrote his thesis on emoticons at Stanford. “There they are, these words, sort of flat. We’re depleted, we’re dry in terms of the cues we get to use to signal exactly what we mean.”

And that is where emoticons have come in so terribly handy. The twist is that 32 years into this wild ride, emoticons are giving way to more colorful, more elaborate Japanese-born cousins: emoji. Those little images—invented in the ’90s by telecommunications planner Shigetaka Kurita—are much more versatile than punctuation will ever be. They’re easier to use and more efficient; three clicks can give you all this

From Facebook's Finch collection of emoji, which the company calls "stickers."

But on this momentous occasion of the emoticon entering its 33rd year, let us take a moment to appreciate the qualities it has that emoji do not. For one, developers and designers are flooding our operating systems with their own versions of emoji (like Facebook’s) — which, unlike uniform colons and dashes, are all different. Though most people are familiar with the emoji Apple designed (like those in the above paragraph), there is no standard set. So some only work on this browser or that phone and often what we get, instead of that important, clear visual cue of a person’s meaning, is this unhelpful thing signifying that an icon should be there, but is not:

In an attempt to one up each other, emoji developers have also started making symbols that can actually confuse situations as much as clarify them. Take this adorable yet semantically unhelpful emoji from social app Line:

You know, for those times when you’re expressing something that really won’t come across quite right without a half-peeled banana with a milk mustache.

It is, of course, lovely that texters have the option to add this to their epistle, but there is a simplicity it lacks that an old-fashioned, primitive emoticon like ; ) does not.

Emoji are indisputably the cool kids to the emoticon’s awkward yet lovable science teacher. But they’re not dead yet! Until there is a standardized set of emoji—or software capable of translating all images onto all electronic devices as senders intended them—people will be relying on these 32-year-old standbys. So happy birthday to you, you little symbolic gems, and thank you for all your fine work so far = ). 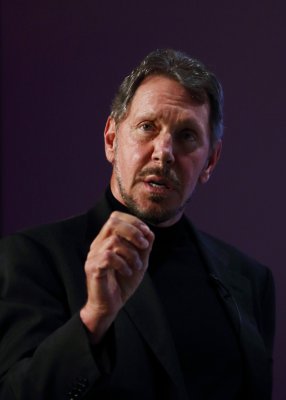 Larry Ellison Steps Down as CEO of Oracle
Next Up: Editor's Pick