It's a Huge Mistake to Back Rebel Groups

Fighters from the Islamic State group parade in a commandeered Iraqi security forces armored vehicle down a main road in the northern city of Mosul, Iraq, on June 23, 2014
AP
Ideas
By Mark Kukis
Mark Kukis is currently working with Andrew Bacevich on a forthcoming online course called War for the Greater Middle East. It launches Sept. 24 on EdX.

President Obama’s first moves in his newly announced campaign against ISIS should be unsettling to us all as we mark another 9/11 anniversary. The Administration has clearly signaled its intent to make Saudi Arabia a key partner in training, arming and supporting so-called moderate Syrian rebels against ISIS. This is a terrible idea and should be abandoned. The U.S. and Saudi Arabia have cooperated before in supporting rebel fighters — in Afghanistan in the 1980s. And of course the most famous of those rebels was Osama bin Laden.

Saudi and American officials seeking to stand up rebel forces against ISIS appear to mean well. They do not intend to create future terrorists. But the planners of this strategy in Washington and Riyadh delude themselves about the nature of the fighters they create. American policymakers especially tend to believe that rebels trained and supported by America will respond to U.S. direction and serve U.S. interests, functioning in essence as crude but effective instruments of foreign policy. This has been the consistent belief of American policymakers since the end of WW II and has led the U.S. to support unsavory outfits ranging from the contras to the Kosovo Liberation Army.

By definition, rebel groups do not answer to authority. They tend to take whatever arms, training and funding they can get from friendly governments and pursue their own agenda. Any rebels backed by Saudi Arabia and America can be expected to do the same. True, the interests of anti-ISIS rebels align with U.S. and Saudi policy aims in the sense that all camps yearn for the downfall of the horrific regime presiding now over large swaths of territory in Iraq and Syria. Mutual interests likely end there, however. Rebel groups backed by Washington and Riyadh can be counted on to pursue their own aims even while they work with America and Saudi Arabia against ISIS.

What goals the rebels might have for themselves will be difficult to know. The fighters who will soon begin arriving at training camps in Saudi Arabia probably will not have a sense themselves of what the future holds beyond the fight against ISIS. But we can all be sure that nothing good will come of the effort apart from any blows these guerrillas manage to land against ISIS. This is because the region as a whole is in such turmoil. Even if the Syrian rebels depart Saudi Arabia as moderates, they will not likely remain so as they wage war in lands where extremism and instability prevail. The rebels backed by Washington against Muammar Gaddafi probably did not plan to begin fighting among themselves immediately upon the Libyan ruler’s downfall. Yet they have, plunging the country into a state of near chaos.

Rebel groups in the Middle East supported now by America and its allies in the region will undoubtedly sow something similar or worse for themselves and their government backers. Once set loose, they might become involved in terrorism, fight one another, prey on civilian populations or contribute to the next regional crisis. In fact, all those scenarios are likely courses for any such rebel groups given the environment in which they are supposed to operate. These are foreseeable outcomes of the policy now pursued by the Obama Administration and should be avoided. Saudi Arabia and other nations in the region have a role to play in confronting the menace of ISIS. But they should do so with regular military forces. Twice in recent decades Arab nations have rallied armies in unison to wage war against Israel. If Middle East nations can form a military coalition against Israel, they can do so against ISIS. And the Obama Administration should press them to do exactly that rather than creating yet more militant groups in the region.

Mark Kukis is currently working with Andrew Bacevich on a forthcoming online course called War for the Greater Middle East. It launches Sept. 24 on EdX. 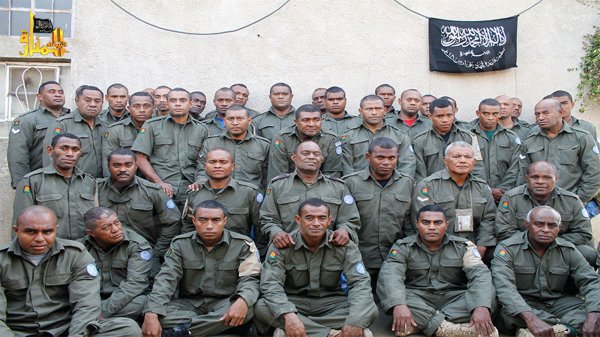 Poor Countries Do Most of the World's Peacekeeping
Next Up: Editor's Pick