Lessons from the Pistorius Trial on Race, Guns and Class

South African Paralympian athlete Oscar Pistorius leaves the High Court after the verdict in his murder trial where he was found guilty of culpable homicide in Pretoria, South Africa on Sept. 12, 2014.
Gianluigi Guercia—AFP/Getty Images
By Naina Bajekal

Audiences have been gripped by the story of the South African sporting champion Oscar Pistorius, who was accused of shooting and killing his girlfriend Reeva Steenkamp on Valentine’s Day last year. In March, South Africa devoted a TV channel that allows 24-hour viewing of the trial, which dominated global headlines and Twitter feeds again this week as the verdict was announced. Pistorius was found not guilty of premeditated murder, the more serious charge, but was found guilty of culpable homicide—the equivalent of manslaughter. His sentence remains to be decided.

But what should we take away from the Pistorius case?

It’s clear that the media attention given to the trial is largely due to Pistorius’s iconic status as an international athlete. A double-amputee who went on to compete in the Paralympics and Olympics using prosthetic legs, Pistorius brought glory to South Africa in the 2012 London Games and inspired many with his motto: “You’re not disabled by the disabilities you have, you are able by the abilities you have.”

But coverage of the trial has also been so extensive because the case has required us to probe deeper in order to understand the environment in which the crime took place. Pistorius’s defense was predicated on the argument that his response—shooting four times through a locked door at someone he believed to be an intruder—was a reasonable one. If Pistorius didn’t live in a nation with extraordinary high rates of violent crime, under a government tarred by corruption, his defense that he believed himself to be in danger would have been easier to dismiss. But in her verdict the South African Judge Thokozile Masipa reminded the world that her country’s endemic problems with violence does not excuse Pistorius. “Many people in this country have been victims of violent crime,” she said, “but they haven’t resorted to sleeping with guns under pillows.”

It’s no surprise that a great deal of the commentary has focused on what the trial can tell us about contemporary race relations and violent crime in a nation that abolished apartheid just 20 years ago. Despite the fact that whites make up only 8% of South Africa’s population, the majority of witnesses in the trial belonged to the same white, wealthy Afrikaner circle as Pistorius and Steenkamp, many of whom also lived in the couple’s elite high-security complex. The racial composition of the 37 witnesses shed lights on the kind of unofficial segregation and social inequality that still persists in South Africa today, where the average income of a white household is still six times higher than that of a black one.

It appears that the post-apartheid “rainbow nation” spoken of with such hope by Archbishop Desmond Tutu is still a ways off. Indeed, some commentators think the only reason the case has caught the world’s attention is because it is about a wealthy, successful white man and a beautiful, glamorous white woman. Yet others have seen the trial as an indication of the progress made in South African society—progress that has enabled Judge Masipa, a black woman who grew up poor in the Soweto township, to now determine the fate of a white man. And some have said the more pressing question is the problem of violence against women, an issue that cuts across national, racial and social borders.

However, there is a danger in taking what may be a deeply individual tragedy and viewing it as a reflection of an entire society. The fact that Pistorius is wealthy does not mean all white Afrikaners are, nor does the fact that Judge Masipa is black indicate that the legal profession in South Africa has achieved racial parity. We should try not to think of the trial as a mirror on South African society but rather as a window into a certain section of it, a window that has encouraged many of us to learn more about the country’s unique judicial system and broader social structure.

We all want to believe that the steps taken towards equality have led to unequivocal success. While great strides have been made, we must remember that a country can have black presidents and black judges and still struggle with lingering racism and segregation. We must ensure that as the trial draws to an end, we won’t be closing the door on the difficult conversations that need to be had about the way in which race, gender, wealth and power intersect—in South Africa, and far beyond. 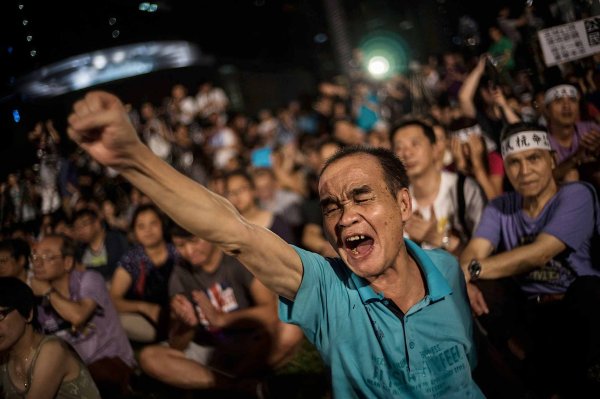 Showdown in Hong Kong
Next Up: Editor's Pick