Supermodel Andreja Pejic on the Reaction to Her Gender Transition

Before she started filming a documentary about her male-to-female gender transition, before she appeared on the cover of New York magazine or became an international supermodel prized for her androgynous look, even before she was discovered by a talent scout while working at a McDonald’s in Australia, Andreja Pejic was known to the world as Andrej, a little boy growing up in a Serbian refugee camp during the Bosnian War.

She has since rocketed to fashion stardom and is now embarking on a new, and largely unprecedented, adventure: transitioning from male to female while working as an international supermodel in the public spotlight.

Pejic isn’t the first internationally successful, high-profile transgendered model. But she does seem to be the first to start a career identifying as one gender, and then transitioning to another in the public eye. She’s raising money now to fund a documentary about her transition, and about how the fashion establishment reacts. She spoke to TIME about the project, life as a transgendered Serbian refugee and how the industry has reacted to her transition so far.

TIME: Was a refugee camp a challenging place to grapple with gender identity issues as a child?

Andreja Pejic: I had to learn how to navigate and how to hide it from certain people. I was lucky in that I didn’t have an aggressive Balkan father, because my parents were divorced when I was very young and usually it’s the father in that region that says “You can’t do that” and “I don’t want my son playing with dolls.” So I could get away with it sometimes. I just learned in what situations it was OK and in what situations it wasn’t. When you’re really young people think you’re going to grow out of it. They’re almost like, let the kid have fun and he’ll grow out of it or she’ll grow out of it. Or, it’s just a passing phase. Obviously that didn’t happen.

When did you learn about what it meant to be trans, about the possibility of living publicly as a woman?

At the age of 13 with the help of Google. I would dream about being a girl. I would imagine it all the time, daydream about it a lot. But I didn’t know it was exactly possible. I would talk to my mom about it and she didn’t really know. She was like, “Oh you don’t want to be a woman. It’s so much harder for a woman. You can achieve so much more as a man.”

I didn’t know there were medical terms to describe my feelings, that there were doctors and a whole international community of people and resources and forums. When I learned that it was very eye-opening. I was able to define myself.

Did you ever think maybe making this transition to isn’t a good idea? You went from a refugee working at McDonald’s to an international supermodel. That’s a lot to risk.

It was more about timing. It’s not a desire that you can really get rid of. It’s not really a choice like, “Is it a good idea or not?” It’s not an aesthetic decision either. It’s a constant need. Unless you can fill that need it just grows stronger and you feel that you aren’t living a completely truthful life and the longer you live it like that the harder it gets. Could I have lived in my previous days for the rest of my life? I could have. But I wouldn’t have been nearly as happy and I didn’t want to keep wondering for the rest of my life what it would be like to live as a woman. And I just felt like life’s too short. We are in the 21st century and there are medical advancements. They’re available and why should I not take that opportunity? I definitely delayed my transition. I was originally going to do it after high school but the opportunity to go out into the world and earn some money was definitely great. Modeling became a great opportunity. So I put off the transition but it was always going to happen.

Who do you look to for inspiration?

On a personal level my mom is by biggest inspiration. She’s always been an idol for me. I used to dream about growing up and being like her. She really sacrificed her life for her kids and I really appreciate that. I definitely did look back into the past when I was a teenager for transgender icons, like a famous model called Tula in the 1970s-80s who starred as a Bond girl. She was a leading model when The News of the World outed her. She wrote two very great books. And past models like April Ashley, Bobby Darling. I think that it’s important to recognize the ones who came before.

The unique thing about your story is that you transitioned in the public eye. What has the reaction been so far?

I never thought I would do it this way. I always thought I would leave the life and do it as privately as possible. So when I decided to go public with it there was definitely a fear of rejection and I think it’s something that every person fears before they transition. It’s one thing to have family support and another thing to have the world accept you. I definitely didn’t know what was going to happen and I thought it was important to document it and that’s why we started a documentary. I thought it was important to tell my story.

I have to say the reaction has been pretty positive. I think there’s a level of respect that didn’t exist when I was growing up, definitely, toward these issues. Because I grew up with, you know, Jerry Springer, and that was the only representation of transgender people, and how horrible is that? I think we’re all doing this to tell a story that we hope will inspire other people, in the hope that they won’t have to hide and possibly educate parents and give hope to transgender youth and anyone that felt different. 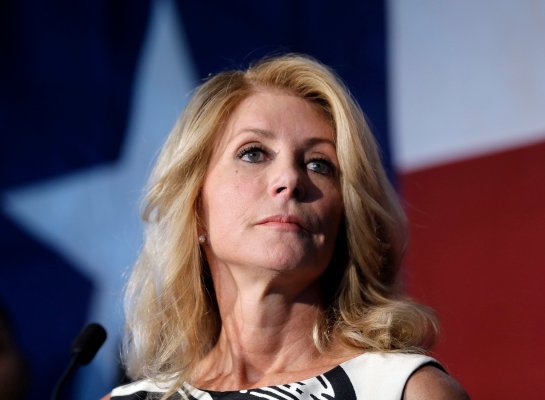 Wendy Davis on Her Most Important Filibuster
Next Up: Editor's Pick