Between Pragmatism and Passion

South China Sea, a crew member of a Vietnamese coast-guard vessel monitors the movements of a Chinese patrol ship
Kyodo—AP
By Michael Schuman

After world War II, the belligerents in Asia could have licked their wounds and seethed in resentment. Their relations could have been poisoned by raw memories of bloody atrocities and brutal battles, but also by centuries of historic animosities and perceived injustices.

Instead, they chose to make money. The Japanese set aside the two atomic bombs dropped on their civilians and embraced the U.S. Eventually, China buried its Cold War rhetoric and bitter recollections of wartime invasion and opened up to trade and investment with both the U.S. and Japan. China doesn’t recognize the existence of Taiwan, which it considers a renegade province, but that hasn’t stopped the two economies from becoming tightly connected. South Korea is a major investor in, and beneficiary of, China’s tremendous growth even though Beijing supports Seoul’s bitter enemy, Pyongyang.

The list goes on. For the past 60 years, Asia has favored economic integration over political rivalry. The result has been unprecedented progress in building industry, lifting incomes and alleviating poverty. Asia’s economic miracle would never have occurred if the region’s leaders had continued to shoot at each other. Today, that lesson is being forgotten. With rising wealth and social change has come escalating nationalism, tearing open old wounds and releasing ancient hatreds. China, asserting what it sees as its rightful position as East Asia’s dominant power, has reignited territorial disputes with Japan, the Philippines, Vietnam and India.

Relations between China and the U.S. have turned frosty as well. Beijing is increasingly irked by America’s continued presence in Asia, which acts as a check on its own ambitions. Now, along with the container vessels carrying the vast merchandise produced in East Asian factories, fighter jets and naval vessels of various nations buzz each other, and threaten worse. As the leaders of Asia and other Pacific Rim nations ready to meet in Beijing for the Asia-Pacific Economic Cooperation (APEC) summit in November, tensions in the region are arguably at their highest since the Korean War.

There are already worrying signs that the region’s economic ties are unraveling under the heightened hostility. Japan has been one of China’s most important investors and trading partners, but the dispute between the two countries over contested islands, which erupted in 2012, has badly damaged their economic relations. Investment by Japanese companies into China has plunged by 45% so far this year. The U.S. meanwhile, is pursuing a wide cross-Pacific free-trade agreement, called the Trans-Pacific Partnership, with the conspicuous exclusion of China, Asia’s biggest economy.

Ganeshan Wignaraja, director of research at the Asian Development Bank Institute in Tokyo and an expert on integration in Asia, believes that Asian leaders will continue to prioritize development over dissension. The economic ties binding Asia together are too strong and too profitable, he contends, to be so easily thrown away in nationalist wrangling. Intra-Asia trade has surged from 30% of the region’s total in 1985 to more than 50% in 2013. With Asia’s consumers becoming ever wealthier, that share is likely to rise even further. Wignaraja insists that “Asia ultimately is really about business.”

Common sense says that nations won’t fight with their trade partners. History says otherwise. Earlier this year, Japanese Prime Minister Shinzo Abe compared the China-Japan relationship today to that between Britain and Germany before 1914 and the outbreak of World War I. Economic ties between those two European powers were strong too, but that did not prevent their horrific conflict.

In Asia today, the outlines of competing blocs are forming, much as they did in early 20th century Europe: the U.S., Japan and their allies on one side, China and its friends on the other. Both Beijing and Tokyo are—ironically—using trade and investment to woo countries in Southeast Asia into their orbit. India’s new Prime Minister, Narendra Modi, recently went to Japan and cozied up to Abe—a gambit clearly meant to counter China.

Asia’s economic miracle was underpinned by regional security and a commitment to development. As Asia’s leaders gather in Beijing in November for APEC, they’ll have to make a choice between pragmatism and passion. 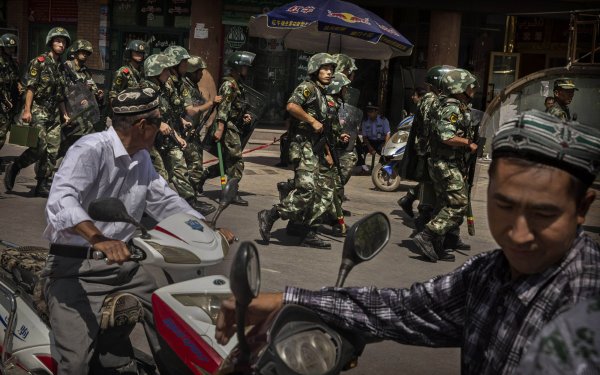 China's Silent War on Terror
Next Up: Editor's Pick