By Per Liljas and Noah Rayman

The judge in the trial of Oscar Pistorius ruled on Thursday that the South African runner was not guilty of murder but delayed handing down a formal verdict, which may still hold him guilty of culpable homicide, likely until Friday.

The verdict will mark the beginning of the end of a globally publicized, six-month-long trial of the feted athlete, who in 2012 became the first double amputee to compete in the Olympics. Pistorius, 27, was charged with murdering his girlfriend, Reeva Steenkamp, on Feb. 14, 2013, after shooting her four times through a bathroom door at his home in Pretoria. He claimed to mistake Steenkamp for a possible intruder, the Associated Press reports, but chief prosecutor Gerrie Nel argued that Pistorius intended to injure her after the two had quarreled.

In the first day of her verdict reading, Judge Thokozile Masipa said prosecutors did not show beyond a reasonable doubt that Pistorius was guilty of premeditated murder. The judge admitted she had doubts about several witness accounts, including those who heard a scream or cry thought to be a woman’s. “None of the witnesses had ever heard the accused cry or scream, let alone when he was anxious,” Masipa said, alluding to a chance it could have been Pistorius’ voice.

But, without issuing a formal verdict, she said “culpable homicide is a competent verdict,” according to the AP. “I am of the view that the accused acted too hastily and with excessive force.”

Culpable homicide with a firearm normally carries a five-year prison sentence in South Africa, the AP adds, though the number of years can vary. And the final verdict may not mean the end of the saga, as Pistorius and the prosecution both retain the right to appeal the decision.

Pistorius, who frequently caused the court to adjourn throughout the trial in order to compose himself and who Masipa described as a “very poor witness” on Thursday, the AP reports, listened while sitting on a bench, at times quietly weeping. He had both legs amputated below the knee when he was 11 months old but began competing in Paralympic events using prosthetic limbs, earning himself the moniker “blade runner.” He proved successful enough to compete in able-bodied events including the 2012 London Olympics, and became an icon for athletes with disabilities.

Steenkamp was a burgeoning star herself who had appeared on the cover of FHM magazine and was slated to take part in an upcoming reality TV travel show. 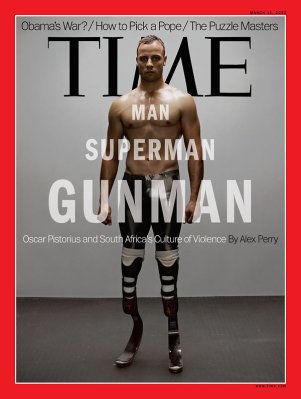 The Oscar Pistorius Case: How It All Began
Next Up: Editor's Pick