Europe Needs A New Source of Oil and Gas, Fast

Summer is over and many Europeans may have to keep warm this coming winter by thinking about their summer holidays while wrapped in blankets, praying for a short winter or for the world to come to its senses. It both cases, they may well be disappointed.

The never-ending conflicts in the Middle East, mayhem in Libya, uncertainty in the Gulf and a war in Ukraine are all going to take a toll on the energy supplies this winter.

Russia sold 86 billion cubic meters of gas last year, all of which passed through Ukraine. Given what’s happening there now, it is highly unlikely that the Russians would allow their gas to transit a country they are (unofficially) at war with. Just as it is unlikely that Ukrainians would allow Russian gas access through its territory.

Result? Many cold Europeans, many angry Europeans and many very pissed off Europeans. Many Europeans will have to make do without enough gas to heat homes, offices and factories. That’s a bad prospect in northern European countries, where winter is no laughing matter. Winter defeated the armies of both Napoleon and Hitler.

And what does history tell us about cold, angry, pissed-off Europeans? Well, whenever two opposing camps got cold, angry and pissed off enough at each other in the past, they typically went to war.

War in Europe? In our time?

It’s not impossible. If current trends continue, it is not at all impossible. Here’s why:

1. Mounting tension between Russia and the West over Ukraine — a situation that is very likely to worsen as the United States and European Union tighten sanctions on Moscow.

3. The spread of the violence and reach of the Islamic State. Besides the havoc they are creating in the region, there is the added threat of hundreds, if not thousands, of their supporters who have learned how to fight in Syria and Iraq returning to their home countries in Europe.

4. Turkey, which in recent years has played a stabilizing role in the region, is moving today in a different direction that could well lead to a new point of conflict. From jumping head first into the Middle East conundrum under former prime minister and now President Recep Tayyip Erdogan, the country’s new prime minister, Ahmet Davutoglu, started off by possibly igniting a new fight when he announced — much to the pleasure of Azerbaijan, and certainly to the dismay of Armenia — that “the liberation of occupied Azerbaijani lands would be a strategic goal for Turkey.”

These remarks refer to the conflict between Armenia and Azerbaijan over Nagorno-Karabakh and outlying areas that have been occupied by Armenia since a violent conflagration around the time of the break-up of the Soviet Union. Armenians and Azerbaijani troops have been engaging in exchanges of fire on a daily basis over the past few months.

5: Mounting tension between Iran and Israel, and between Iran and an unnamed former Soviet republic in the region that Iran says allowed Israel to launch a drone from its territory to spy on Iran. Tehran has promised a stern response. The country in question is thought to be Azerbaijan, Armenia or Turkmenistan.

6. Continued mayhem in Libya, where the political turmoil is affecting the flow of oil and gas to Europe.

7. The continued state of unrest in Israel/Gaza and the surrounding area.

All these points of conflict are complicating Europe’s search for more reliable sources of energy. Europe is hoping to solve its gas shortage problems by purchasing Azerbaijani gas, but it’s unrealistic to depend only on Azerbaijani gas, since Europeans would be at the mercy of interruptions to gas and oil flows from this South Caucasus country.

What Europe desperately needs is a source of energy that with not be interrupted by conflict or politics, that can be delivered via pipeline or by sea, but will not need to transit through sea lanes in areas of conflict.

And although EU Energy Commissioner Guenther Oettinger said last week that he is not worried about gas supplies from Russia via Ukraine, that show of confidence did not stop him from going to Moscow to plead Europe’s case with the Russians.

So where does that leave the Europeans other than out in the cold? Trend energy analyst Vagif Sharifov believes the new bonanza of natural gas lies in the Arctic, where more than 1,500 trillion cubic feet of natural gas can be found.

But polar drilling comes with a high cost and huge challenges. Europe might need to keep looking. 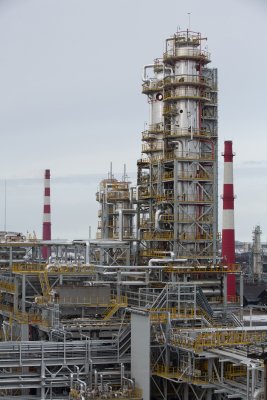