Wendy Davis on the Filibuster That Mattered to Her Most

In June 2013, Wendy Davis made headlines across the country while standing on the floor of the senate chamber in the Texas legislature.

A member of that chamber’s embattled Democratic minority, Davis donned a pair of pink running sneakers under her otherwise business-as-usual attire and staged an 11-hour filibuster against a bill that included stiff restrictions on abortion across the state.

She ultimately lost that fight — the measure eventually passed and its constitutionality is now being fought over in the courts — but the episode became a viral sensation. Even those running shoes became Internet famous; “Guaranteed to outrun patriarchy” wrote one Amazon.com reviewer of the sneakers.

Davis was propelled to national prominence overnight, and she’s now making a long-shot bid for governor of Texas. But before her 2013 filibuster — which, she tells TIME, is not even the most important filibuster she’s staged — Davis was the daughter of a single mom and a single mom herself, experiences she has written about in her memoir Forgetting to Be Afraid, released this week.

She speaks to TIME about her struggle to get a college degree, her fight for reproductive rights and her favorite ice cream (it’s Rocky Road).

Your memoir is called Forgetting to Be Afraid. What inspired the title?
It was inspired by a Lady Bird Johnson quote. She was asked at least on one occasion by a group of young women how it is that she pushed through fear to do things, because she was inherently a very shy person. She advised them that you have to get so wrapped up in something you forget to be afraid. My whole life story can be captured through that idea. I had to make a way out of no way for myself and my daughter. Due to the fact that I was so wrapped up in trying to do that, I forgot to be afraid of doing it. Along every step of my journey I think that that sentiment really captures how it is that I’ve pushed through fear, put my head down and done what I needed to do.

Are you inherently shy yourself?
I was a very shy child. And I talk in the book about moving from being very shy to being a fighter, and that shift really came from the need to fight first for myself and my daughter and then next in the public-service arena for people who don’t have the same opportunities that I had in a myriad of ways.

In your book you write about your decision to terminate two pregnancies for medical reasons. Did that motivate your filibuster against the Texas abortion bill?
Honestly my personal experience in that regard was part of what I want people to know about me in hopes that it might help people struggling with the same situation. But my stand for reproductive rights in Texas was primarily motivated by my understanding of the harm that would come to women across our state if they were denied access to safe reproductive care. I have always firmly believed that women should be trusted to make decisions for themselves with their family, their faith, their doctor, and that the government has no business intruding in that most private arena. I fought that day for women, and men who love them, whose voices had been cut out of the process. In committee hearings at the state legislature, there were so many people that had signed up to speak and been told after several hours that their testimony was repetitive and they were cut off. I wanted to give voice to the people who felt like they’d not been heard.

But those restrictions were eventually passed. In fact, restrictions on abortion have been tightened across the state.
The first provision, which required that doctors have admitting privileges (to a hospital) within 30 miles of an abortion clinic was implemented right away. It immediately caused 21 of the 40 clinics in Texas to close. The second provision was set to go into effect on [Sept. 1], but a federal judge ruled the law in its entirety unconstitutional. As a consequence of that and while it’s on appeal at the Fifth Circuit I know that some of those health centers are considering reopening, some are waiting to see what the Fifth Circuit will do.

Was the filibuster your defining moment as a politician?
A lot of the people know about my filibuster last summer but as important if not more to me was my filibuster in 2011 to try to stop $5.5 billion from being cut from our public schools and try to stop a dramatic reduction in financial assistance for our students trying to go to a state university. Access to opportunity comes through education, and that is my primary passion and fight. And it’s why I’m running for governor.

You have daughters aged 32 and 25. Do you feel hopeful about their future?
What I see when I look at them is the fact that their mother broke through and got a college degree created a path for them to logically follow. I think about how fortunate they are that they have the ability to do that and I think about all of the other young girls in Texas who are those first-generation college students like me who don’t have the same path available to them. It’s that concern that motivates me most.

According to your book, your mom worked at the ice cream chain Braum’s. I love Braum’s! I grew up in Tulsa.
You did? Well, Texas is all about Whataburger. Oklahoma is all about Braum’s.

But your mom worked at Braum’s! Does this make you a traitor to Braum’s?
No, I still crave a Braum’s hamburger every now and then for sure. 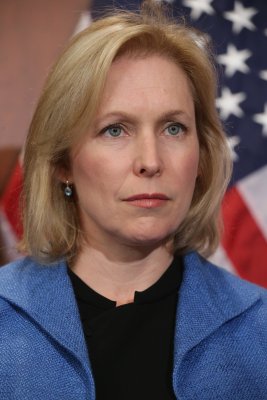 Gillibrand Won’t Name Colleague Who Called Her 'Porky'
Next Up: Editor's Pick