Apple Is Killing the Joy of Personal Style

Apple has long been known for its aesthetic approach to tech, but with this week’s announcement of the Apple Watch, the company is taking on fashion—looking to impose structure on the very unstructured concept of personal style.

“It’s incredibly customizable, so you can find one that reflects your personal style and taste,” Apple’s CEO Tim Cook assured the audience at Tuesday’s announcement—an occasion for which he wore a normcore ensemble, unironically. Considering that the Apple Watch comes in only three near-identical face styles and half a dozen band-types, his commentary is not so different from Henry Ford’s reassurance that “people can have the Model T in any color—so long as it’s black.”

Yes, the Apple Watch offers more customization than the company’s products have in the past. But when you consider its potential social footprint, as well as Apple’s take-no-prisoners approach to product introductions, the device’s shape, colorways, and embellishments become a mandate, rather than a personal choice.

From an aesthetic perspective, the Apple Watch is reasonably attractive, if unremarkable—not too different from traditional sport watches, but with the air of a fancy Tamagotchi strapped to your wrist. But its combination of cachet, tech functionality, and millions of Apple fanatics who consistently drink the company’s Kool-Aid lays the groundwork for what is likely to be a runaway success.

And that is a shame. In a worst-case scenario for fashion, Apple will not only attain a monopoly on the timepiece market, but also the confidence to wield a larger impact on how we dress ourselves each day. The watch is no doubt an indication of how Apple will approach future fashion products, offering the masses a constrictive framework in which to dress themselves, all under the guise of customizable “self expression.”

And that places personal style in its purest form at risk—inhibiting a consumer’s right to varied choices. It’s not melodramatic to say that while it’s a watch today, it could be a whole, technologically optimized wardrobe in two decades’ time. The company now boasts Angela Ahrendts, Burberry’s former shape-shifting CEO, as a senior vice president.

Every additional fashion creation from Apple will inadvertently create a less diverse shopping landscape. Sure, we could chalk it up to innovation—but if our timepieces become as uniform as our cell phones, the loss of the Rolexes, Seikos, Breitlings, Patek Phillipes, and Swatches of the world would be an even sadder loss for fashion as a whole. And that’s not to mention how if Apple continues down this path, clothing brands – from Gucci to Gap – could face similar impact.

The more Apple invades the fashion market, the more it will look to create a robotic consumerist culture (something it’s already done with tech)—in turn manipulating the greatest enjoyments of style and personal expression.

Misty White Sidell is a fashion, style, and culture journalist residing in New York City. A Boston native and Fashion Institute of Technology alum, Sidell has also contributed to ELLE, The New York Observer, The Daily Beast, Newsweek and Fashionista, among others. 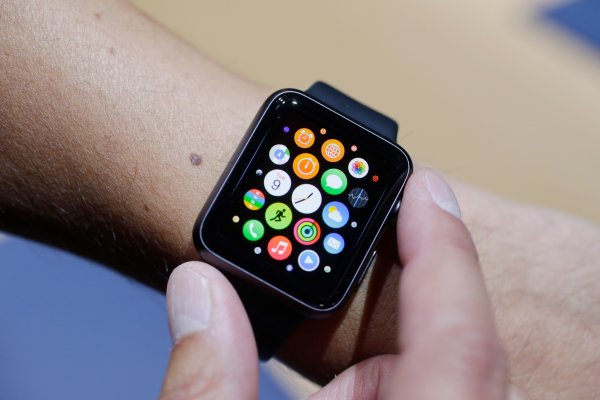 Apple Watch: To Wear It Like a Man — or a God?
Next Up: Editor's Pick