7 Things Parents Need to Know About the Apple Watch

An Apple Watch is seen during an Apple event at the Flint Center in Cupertino, Calif., Sept. 9, 2014.
Stephen Lam—Reuters
By Eliana Dockterman

From the iPod to the iPhone to the iPad, Apple has a knack for creating devices that kids love. So if the Apple Watch catches on, it won’t be long until your middle schooler is begging for her own. And though you may not be prepared to drop $349 on a birthday gift for your kid anytime soon, the price of the Apple Watch will likely drop in the next few years.

“Smart watches are a train that are leaving the station no matter what,” says Jim Taylor, author of Raising Generation Tech. “They’re the next big thing. It’s not whether it becomes a part of the culture but when and how.”

So what does a future in which kids and teens are sporting smart watches look like? Parents will be able to use their children’s smart watches to track their location via GPS and even monitor their exercise. But for those parents who already hate how much time their children spend looking at their phones, the smart watch could be their worst nightmare.

“Often parents are purchasing for certain reasons, but the technology ends up getting used in other ways by the kids,” says Mimi Ito, an anthropologist at the University of California at Irvine who studies how technology affects young adults. Educational computers were repurposed as gaming devices and “in case of emergency” smartphones as social media tools.

So here are the seven things you need to know about smart watches before jumping on the next kid-friendly tech trend:

1. Kids will become even more connected

Vibrations from the smart watch will notify wearers when they have an email, text message or social media notification. Until recently, there was always the possibility that pings from a smartphone would be muffled in the bottom of a backpack. But kids will now be physically attached to their devices.

And Apple is inventing even more ways to distract users. Teens can now add new animated emojis that are customizable to the touch — they can raise eyebrows or turn smiles into frowns — to every text message they send. And there’s even a new way to sext: teens will be able to send their heartbeats through the watch.

“At least before kids would have to take their smartphone out of their pocket,” Taylor says. “It’s another level of ease of access, in a bad sense. I think kids just need to look up more, and that won’t happen here.”

2. For better or worse, you’ll be able to track your child’s every move

Family tracker apps that allow parents to see a child’s location via GPS on their smartphone are already popular. Which means that a GPS device in the form of a smart watch is even more appealing because it’s less likely to be forgotten in a car or purposely left behind at a friend’s house.

But as parents who use tracking apps can attest, following your child’s every move can cause family tension. “It just gives parents another level to express their fears and paranoias,” says Taylor. “And it really demonstrates a lack of trust in their children.”

Scott Steinberg, author of The Modern Parents Guide, believes that if you are going to track your kids, you should have a conversation with them about boundaries. “It’s tremendously important to know what your children are doing in case of an emergency, but that doesn’t mean having to hover over their shoulder every minute of every single day,” he says. “A big piece of it is establishing ground rules and trust. Let them know you are going to be monitoring them and why you’re doing it. Often knowing that you’re checking in as a trusted presence is sometimes enough to help them make better decisions.”

3. Paying for things will be easier than ever, so watch your credit card

The Apple Watch (like the new iPhone 6 and 6 Plus) will be compatible with Apple Pay, a service that allows people to buy products with the push of a button. So now instead of ‘borrowing’ your credit card before heading to Forever 21, your teen can just present her watch (assuming it’s linked to your iTunes account, and therefore your credit card) at the cashier to purchase those cute new flats.

“The easier it is to purchase anything with a swipe, the more temptation you’re putting in front of children,” says Steinberg. “It comes down to discussing responsible spending habits.”

4. Smart watches will factor into the classroom

Smart watches have the potential to be a major distraction from school work. Many schools have already banned smartphones from the classroom.

But these new devices have could also help augment the classroom. “There are interesting potential uses: Monitoring activity in P.E., being able to communicate with your classmates or teachers or interesting apps that allow you to gather information inside the classroom or outside of school,” says Ito. “There are just a lot of cultural barriers to getting personal devices into the classroom.”

But that means you should still prepare yourself for another debate on tech in school.

5. Kids will be able to track their activity levels

Tech companies are betting on fitness trackers to battle the country’s childhood obesity problems: 75% of American children aren’t getting the 60 minutes of physical activity per day recommended by the CDC. Devices like LeapBand, KidFit and iBitz aim to make working out more fun: the new LeapFrog device, LeapBand, features customizable cartoon characters that guide you through activities and challenges.

But since Apple sets the status quo of cool, the Apple Watch could make fitness tracking for kids go mainstream. There’s the potential for information overload: will a teen already prone to eating disorders use the device to excess? Perhaps.

But overall, experts believe the effects will be positive. “I think it has the potential to make fitness more fun for kids,” says Steinberg. “One of the most challenging things for a kid trying to eat healthier or exercise more regularly is getting the sense that they are making progress, and I think having that information at their fingertips can be very helpful and inspiring.”

Parents are already scrambling to keep tabs on their children’s online activity. It’s hard to tell if they are being cyber bullied, sharing inappropriate images on social media or talking to unsavory folks via text message. “The more devices you introduce, the more things parents have to keep track of,” says Steinberg.

And it only gets worse when the device is actually affixed to the child’s wrist. “When we did studies of teenagers, we found they’re living at home but have romantic relationships or friendships that they feel most connected to. So the kids would almost literally wear their phones on their body. It would never leave their side,” says Ito. “The watch will just accelerate that tendency. It will force families to develop better strategies for disconnection.”

7. There will likely be parental controls 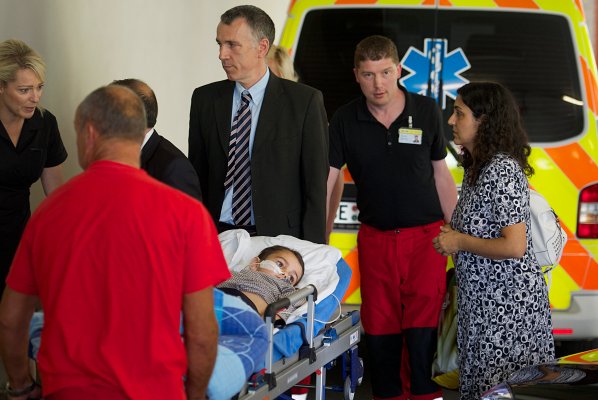 When Parents and the State Disagree Over a Child's Medical Treatment
Next Up: Editor's Pick