The devastating floods resulting from Kashmir’s worst rains in half a century claimed more lives on Tuesday, with the total death toll now breaching 400 and local people decrying officials for failing to adequately deal with the catastrophe.

Several thousand people are still trapped on rooftops in the restive Himalayan region waiting to be rescued, reports Reuters, and local residents have criticized both the Indian and Pakistani authorities for a lackluster response to the crisis. Indian news channel NDTV reported that some rescue workers were even attacked by furious locals.

Although India’s metrological department had forecast heavy rains in Kashmir last week, the Central Water Commission in charge of issuing flood advisories apparently did not warn the local authorities.

“We were all caught off guard because there was not a single warning issued by the weather office. The flash floods took us by surprise,” an official from India’s National Disaster Response Force (NDRF) told Reuters in New Delhi on the condition of anonymity.

Mohammad Irfan Dar, a New Delhi-based independent filmmaker who originally hails from Srinagar, tells TIME that efforts to organize private relief donations have been thwarted by the authorities.

“In Delhi, most of us are focused on raising awareness, organizing relief and gathering supplies,” he said. “The biggest challenge we are facing is the lack of communication from the state.”

Dar’s says he knows of between 300 and 500 relief volunteers across the Indian capital, some of whom have been dispatched to Kashmir to coordinate efforts there. Air India has offered to take essential supplies for free but only has limited capacity. “Drinking water, especially, is a huge problem right now,” he adds.

India’s armed forces and the NDRF have commissioned 61 aircraft and helicopters along with 170 boats, 40 of which were flown to the affected area on Tuesday. Across the border, the Pakistani army and navy have 12 helicopters and more than 250 boats performing rescue and relief operations, according to local newspaper Dawn.

At least 217 Indians have been killed and more than 47,000 evacuated, say officials, while the Pakistani authorities report at least 231 fatalities.

Srinagar, the capital of both Kashmir and the north Indian state of Jammu, remains mostly submerged along with over 2,000 surrounding villages, although the Times of India has reported a few breakthroughs, such as the restoration of landline communications near the city’s airport and the clearing of the first road link since the floods began.

Several people are rescued from the high floodwaters in Srinagar, northern India. 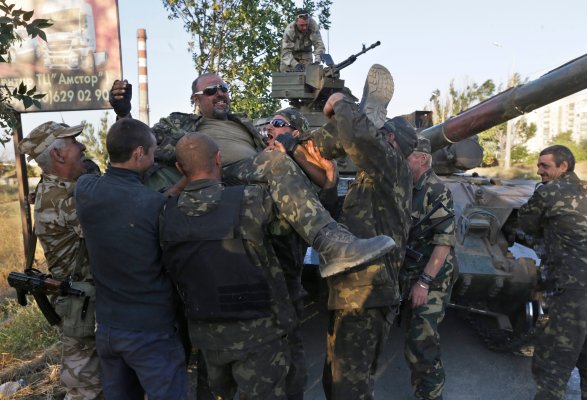 Rebels Free Hundreds of Ukrainian Soldiers
Next Up: Editor's Pick