A street artist, Stephen Doe, paints an educational mural to inform people about the symptoms of the deadly Ebola virus in the Liberian capital, Monrovia, on Sept. 8, 2014
Dominique Faget—AFP/Getty Images
By Per Liljas

The Ebola virus is “spreading like wildfire and devouring everything in its path,” Liberia’s Defense Minister Brownie Samukai told the U.N. Security Council on Tuesday, adding that the outbreak poses a “serious threat” to the war-torn nation’s very existence.

Samukai’s words were echoed by the U.N. Secretary-General’s special representative Karin Landgren, who said Liberia is facing its gravest threat since its decade-long civil war ended in 2003. She deemed the outbreak a “latter-day plague” and its spread “merciless.”

Liberia is worst hit among the nations affected by the current Ebola epidemic with at least 1,200 recorded deaths. Over the past three weeks, the country has experienced a 68% bump in infections and the World Health Organization estimates the surge will continue to accelerate in coming weeks.

There is a severe lack of hospital beds, and suspected victims of Ebola are reportedly turned back to their communities or left waiting outside medical facilities, aggravating the risk of further contagion.

With much state apparatus still in tatters after its devastating civil conflict, Liberia is especially ill prepared to deal with a crisis of this unprecedented scale. At least 160 health workers have been infected with the virus and 79 have died, in a nation that counted a paltry single doctor per 100,000 inhabitants at its onset. Landgren pointed out that the challenge also goes beyond the medical response.

“The enormous task of addressing Ebola has revealed persistent and profound institutional weaknesses, including in the security sector,” she said. “As the demands pile on, the police face monumental challenges in planning and implementing large scale operations.”

Marten Grunditz, chairman of the Liberia Configuration of the U.N. Peacebuilding Commission, emphasized the critical need for continued international support for Liberia’s postconflict transition. The current crisis has already taken a toll on the country’s fragile economy. Only two international airlines still service Liberia, Samukai told the U.N. council, while President Ellen Johnson Sirleaf told an audience at Harvard University over Skype that several mining and agricultural companies had scaled down or shuttered their operations.

“This will cost us quite a bit and it will take us some time to get back to the level of progress that we had,” she said, according to Reuters.

Experts say the most likely explanation for the Ebola outbreak is the consumption of infected wild animals, the so-called bush meat. In a model by Oxford University, published in the journal eLife on Monday, 15 African countries are at risk of similar transmissions — a larger number than was previously assumed.

“This does not mean that transmission to humans is inevitable in these areas; only that all the environmental and epidemiological conditions suitable for an outbreak occur there,” the study’s author, Nick Golding, told the Washington Post.

The U.N. Secretary-General’s special representative Karin Landgren holds a press conference after a Security Council briefing and consultation on the Ebola outbreak in West Africa. 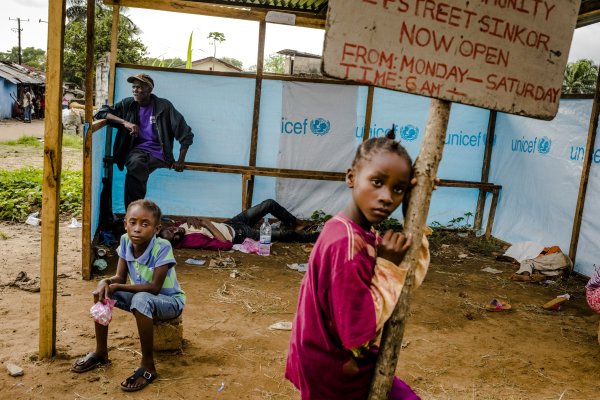