Hands On With the New Apple Watch

There’s a lot we don’t know about Apple Watch, the technology giant’s all-new wearable gadget announced Tuesday to great fanfare in Cupertino, Calif. How long will its battery last? How much will the toniest version cost? How exactly will it interface with the iPhone?

But, having gotten to wear and play with the device, one thing is for certain: The Apple Watch is a beautifully designed piece of technology with enormous potential. In fact, I’d say it’s the most exciting gadget since the iPad, from Apple or any other company.

The watch will come in two sizes, 1.5 inches (38 mm) and 1.65 inches (42 mm), and a surprisingly wide variety of colors and styles. Both sizes feel surprisingly light and solid. An Apple representative would not say how much the watch weighs exactly, but it seems lighter than Samsung’s Gear, which is about 60 grams.

It sits on the wrist very naturally. I have what might be called dainty wrists for a man, and even the larger version didn’t feel bulky. Unlike smartwatches currently on the market, it does not feel overly showy or intrusive, constantly begging for your attention. You could easily forget you are wearing the Apple Watch, and you will.

The Apple Watch’s sapphire touchscreen is slightly curved, which makes the device look more like a piece of jewelry. The screen, which was crisp and viewable from a wide range of angles, is flush with the rest of the device’s body. It attracts a lot of finger prints and smudges.

CEO Tim Cook and design chief Jonathan Ive spent a good deal of the presentation talking about the small nub of the watch called the “digital crown.” It allows you to zoom in and out of the interface and scroll through lists without obscuring the screen. The dial felt solid to the touch and scrolled with very little resistance, though on my unit it was disabled.

The bands are a surprisingly exciting part of the equation. They feature a design that is intended to make it easy to swap in and out, though I didn’t see this demonstrated in person. One of the models I played with had a flexible, leather band with built-in magnets. It felt a lot like toying with the iPad’s Smart Cover, except much more supple. It was very comfortable, as was a metal version.

In short, there is more to like here than any smartwatch yet. That isn’t saying much, though, considering how limited most of those products have been. There seemed to be hiccups in the software here and there. The gadget’s screen is supposed to distinguish between a tap and a more insistent press. But the so-called “force touch” glitched on more than one of the demo units I used. Of course, the devices on display were pre-production models.

In his keynote presentation, Cook said the Apple Watch represents many years of “deep innovation.” It also represents a bundle of promises and questions. The Apple Watch will be available starting at $349 early next year. We’ll have to wait until 2015 to get all the answers. 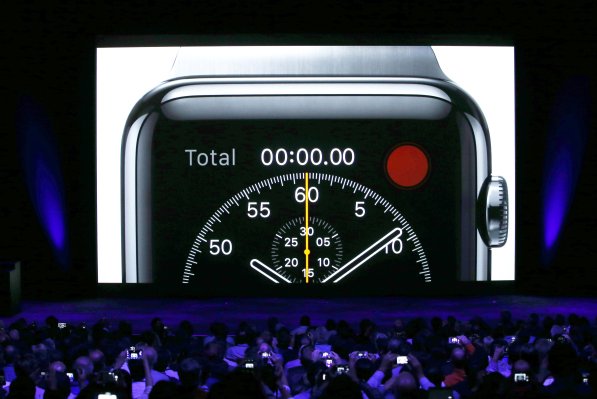 Apple Watch: 10 Things to Know
Next Up: Editor's Pick