Stream Dead Man's Town: A Tribute to Born In the U.S.A.: A Country Twist on Springsteen's Classic

“When I first heard the songs from Born In The USA, as a nine-year old, I thought, ‘Uh, no, this is not for me. I prefer Huey Lewis,’” says Evan Schlansky, the co-executive producer of Dead Man’s Town: A Tribute to Born In the U.S.A. Eventually, though, Schlansky discovered “Thunder Road” and “Born to Run” on a mixtape and fell in love with Springsteen. “There’s something great about discovering Bruce Springsteen when you’re growing up. His music really became the soundtrack to my teenage years,” he noted.

To pay homage to his musical hero, Schlansky struck on the idea of putting together a tribute album, giving an alt-country twist to Springsteen’s album. “I’ve always thought that Bruce Springsteen is secretly a country artist, just without the accent,” he says. He approached Logan Rogers, owner of Nashville’s Lightning Rod Records, to produce Dead Man’s Town, a tribute album, featuring artists such as Low, Jason Isbell & Amanda Shires, Justin Townes Earl, Blitzen Trapper and Trampled by Turtles covering songs from Born In the U.S.A., just in time to mark the seminal album’s 30th anniversary.

All twelve artists took liberties with the melodies and the arrangements — stripping down the songs, adding a country twist or traveling in a different direction altogether, which is just what Schlansky and Rogers wanted. “I thought the songs could work as well as Woody Guthrie-style folk anthems as they did as Reagan-era radio smashes,” says Rogers, who trusted the artists to stay true to Springsteen’s vision.”Everyone involved takes such care in their own lyrics that I knew they would do Springsteen’s justice in a re-imagined way,” he says .

The artists were given creative control over their covers, but the overall sound comes across as fewer jangle and horns as in Born in the U.S.A. with a result more reminiscent of another Springsteen classic — his 1982 album, Nebraska. “It’s like everybody got the same memo to change things up, except there never was a memo,” says Schlansky.

Highlights include Justin Townes’ Earle’s acoustic take on “Glory Days,” Low’s stripped down take on “I’m on Fire” and Holly Williams (a singer-songwriter and the granddaughter of Hank Williams) giving a Nashville twist to “No Surrender”.

The full album is streaming below and is available for pre-order here. Dead Man’s Town drops Sept. 16th, just in time for Springsteen’s 65th birthday on Sept. 23. 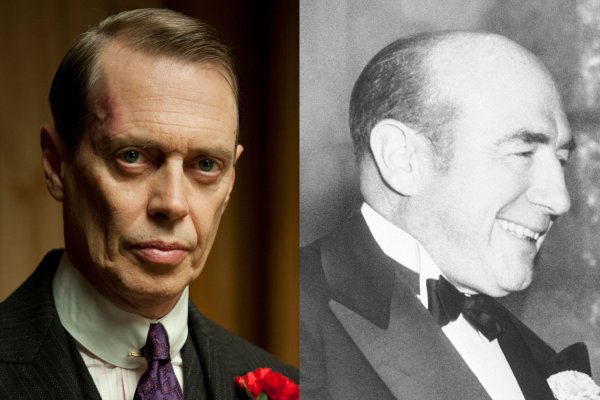 Meet The Real Gangs of Boardwalk Empire
Next Up: Editor's Pick