Scott Brown Threatens Lawsuit Over Being Called a 'Washington Lobbyist'

“Scott Brown is not nor has he ever been a lobbyist,” wrote Colin Reed, Brown’s campaign manager, in a blistering letter to Lessig. “Ever… If you fail to immediately cease the mailer in question, we are leaving all our legal options on the table.”

At issue is the federal government’s definition of the word “lobbyist” versus the popular one, i.e. “one who influences government official’s decisions.” The federal government considers only individuals who lobby 20 percent or more of his or her professional time serving a client as a “lobbyist.” In 2013, Nixon Peabody law firm hired Brown to advise in business and governmental affairs matters, focusing on the financial services and commercial real estate industries.

Lessig responded to the letter quoting the words of Clint Eastwood’s character “Dirty Harry” Callahan — “Go ahead; Make my day” — and offered to openly debate whether Brown was a “lobbyist.” Lessig also asked Brown if it was better to call Brown a former Massachusetts senator “who sold his influence to a DC lobbying firm.” Former Republican New Hampshire senator Gordon Humphrey, who cut an ad for Rubens on behalf of Mayday, released a statement calling Brown a former “lobbyist.”

Brown has narrowed the gap between himself and the incumbent, Democratic Sen. Jeanne Shaheen, from 10 to 6 percentage points, according to a recent New York Times/CBS News/ YouGov survey. 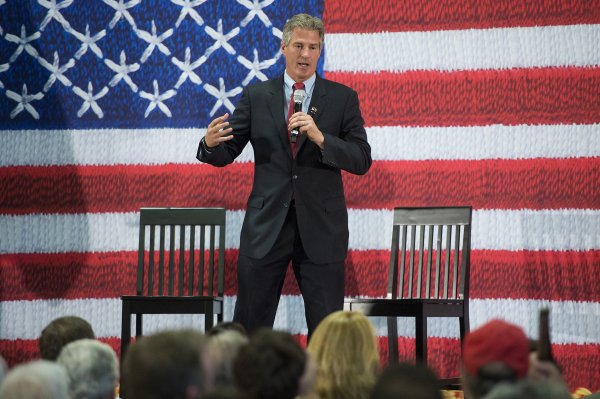