GM to Roll Out a Self-Driving Cadillac

A 2015 Cadillac CTS, equipped with V2V technology, notifies the driver of the approaching Cadillac SRX from the left before the driver could see the vehicle.
Courtesy of Cadillac
By Maya Rhodan

Expect to see a self-driving car from General Motors on the road soon.

Mary Barra, CEO of the largest U.S. automaker, said in a weekend speech that some GM cars will soon have the ability to cruise on highways without being steered by drivers, Bloomberg reports.

During a speech Sunday in front of the Intelligent Transport Society in Detroit, Barra spoke up the feature, dubbed “Super Cruise,” which will give cars the ability accelerate and brake at up to 70 miles per hour on the highway. Barra said the feature will appear in a new Cadillac model around the same time the company rolls out a 2017 CTS model that will be able to communicate with cars on the road.

“Having it done for you—that’s true luxury,” Barra said. “But rest assured, Super Cruise will keep drivers alert and engaged, and when they want to take control, they’re going to find a car that’s really fun to drive.”

Barra said a 2017 Cadillac CTS would also be able to communicate with cars on the road using vehicle-to-vehicle technology, automating road warnings and increasing safety.

“Thanks to V2V, OnStar and a full suite of active safety features, we believe that the CTS will be one of the most—if not the most—intelligent and connected production vehicle on the road,” Barra said.

The innovative models could mean good news for the automaker that was plagued with recalls over the past year due to faulty parts in some of their vehicles. Google has been developing a driverless car model for some time. 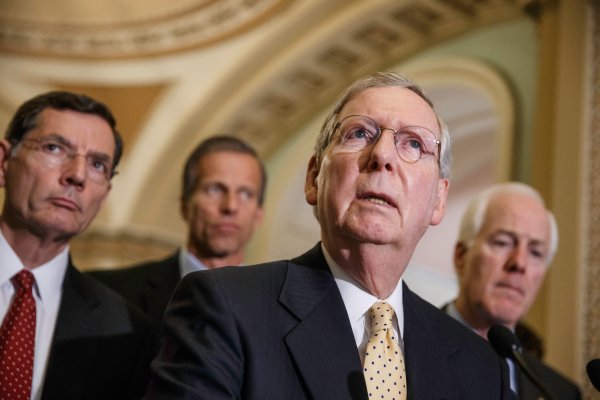 GOP Has Edge in Senate Fight
Next Up: Editor's Pick