Why Peyton Manning Can't Quit After His Super Bowl Blowout

Quarterback Peyton Manning of the Denver Broncos reacts as he walks off the field after their 43-8 loss to the Seattle Seahawks during Super Bowl XLVIII.
Kevin C. Cox / Getty Images
By Sean Gregory

His teammates have defended him too. Pointing the finger at Peyton Manning “would be neglecting all the things he did this season to get us to this point,” says Broncos tight end Julius Thomas. “By no means are we blaming Peyton for anything. He is the reason we are here, he is our leader, and we are going to stand by him.”

Manning himself was asked if the loss was embarrassing. “It’s not embarrassing at all,” he said. “I never use that word. There are a lot of professional football players in the locker room who put a lot of hard work and effort into being here and playing in that game. The word ‘embarrassing’ is an insulting word, to tell you the truth.’”

So were Fox, Manning and the rest of the team seeing the same game as the rest of us? They know the score was 43-8, right?

After the game, the Broncos sounded like a team in denial. Yes, Manning did not give up those 43 points, and his statistical line was far from awful. He went 34-47, for 280 yards, with a touchdown pass and two interceptions. The 34 completions were even a Super Bowl record. The most hollow Super Bowl record in history, but a record nonetheless.

At least the Denver quarterback could concede the evening was depressing. “I don’t know if you ever really get over it,” he said.

Manning has lost two of his three Super Bowl appearances — little brother Eli has more Super Bowl rings — and now, at 37, he is running short on time. Many all-time great quarterbacks, like Dan Marino, never even won a Super Bowl. Others, like Brett Favre, won just one. Manning doesn’t need a Super Bowl to cement his legacy. But after all he has accomplished, after coming back from the neck surgeries and switching teams and setting the records, he’s due one more. If he doesn’t get that second Super Bowl – like his boss, John Elway, did – his career will end with a tinge of disappointment.

Make no mistake: Manning ran into the wrong team Sunday night. Even at his best, he’s probably not beating the Seahawks’ defense, best in the NFL this season and brilliantly capable of thwarting the big Manning pass. Manning’s longest completion was for 23 yards, and that play resulted in a turnover; Seattle’s Byron Maxwell stripped the ball from Denver receiver Demaryius Thomas.

“What about this defense?” Seattle coach Pete Carroll screamed in the jubilant Seattle locker room afterwards, his voice hoarse.“This defense goes plus four today!” Denver had four turnovers, Seattle, none. “Plus four!” The team hoots and hollers.

“Dominant, dominant, dominant,” says Seattle defensive end Red Bryant. “That defense right there, it’s got to go down as one of the best. Got to go down. What’s so great about it, they called us misfits. Nobody wanted us. We’re the best.” A radio reporter asked Bryant about returning to his native Jasper, Texas as a Super Bowl champ. “I got so much love waiting on me!” Bryant shouted.

“We’re just young guys with a bunch of chips on our shoulders,” says Seattle linebacker Cliff Avril, whose second quarter hit on Manning led to an interception and touchdown return for linebacker Malcolm Smith, the game’s MVP. Seattle’s “Legion of Boom” secondary, headlined by Richard Sherman, gets plenty of media attention. But Seattle’s defensive line was key. Manning hasn’t been pressured much all playoffs. In the Super Bowl, however, he felt plenty of heat.

“The line was humming,” says Maxwell. “We’ve got like 8 dudes that can be All-Pro.” Jeremy Lane, a Seattle cornerback, called his crew the greatest defense of all-time.

Manning wouldn’t give Seattle that much credit. He said the Seahawks didn’t even make him uncomfortable. “They just made more plays on defense than we did,” he said. (Again, Denver in denial). All week long, Manning was being asked questions about his future; would he retire after the game? After the Super Bowl trouncing, Manning doesn’t sound like he’s stepping aside. “I think this team used last year’s playoff loss to fuel us,” Manning said. “I thought it made us a better team this year. Hopefully, we can use this to fuel us this off-season into next season as well.”

Then he trudged through the bowels of MetLife Stadium in East Rutherford, N.J. late Sunday night, in a sharp suit, towards the team bus. Though it was probably the last thing Manning felt like doing, he stopped to sign a few autographs. “Can you sign this for my son?” someone asked him. He obliged. “Thank you Peyton,” a woman screamed at him. He turned a corner, and walked out of the stadium, for a long flight home. Odds are, he’s already planning his Super Bowl return.

(MORE: The Best Moments And Photos From Super Bowl XLVIII) 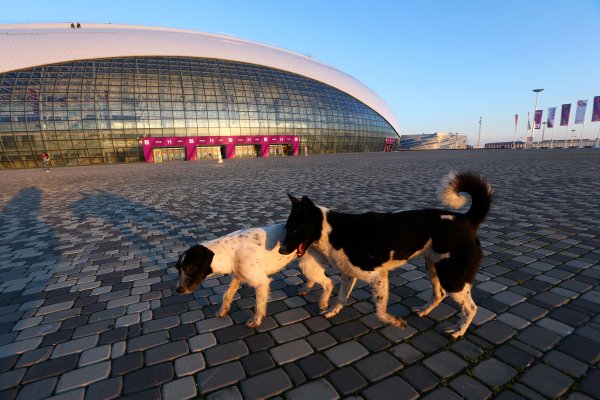 Sochi's Stray Dogs Are "Biological Trash" Says the Guy in Charge of Culling Them
Next Up: Editor's Pick