Rarely has solidly Democratic Rhode Island seen such political drama: To date, the race to be the next Rhode Island governor has already seen party switching, two political dynasties and an Olympic figure skater star in a campaign spot.

The race began in earnest when incumbent Lincoln Chafee, a former GOP senator whose father was former Governor and Senator John Chafee, switched parties from Independent to Democratic. Chafee was hoping to draw support from the state’s powerful Democrats, but soon withdrew from the race when it became clear such support was not going to materialize.

That left the field wide open, with three candidates vying for the Democratic nomination on Tuesday: State Treasurer Gina Raimondo, Providence Mayor Angel Taveras and Clay Pell, the 34-year-old grandson of beloved late senator Claiborne Pell. Taveras held a slight lead in polls going into the summer, but with the help of Emily’s List—and impressive fundraising—Raimondo pulled ahead in at least one recent poll.

“I think it’s going to be close. Raimondo has a small lead and benefits from Tavares and Pell splitting labor. I expect Raimondo to win, but there is some belief that Pell is surging,” says Jennifer Duffy, who tracks gubernatorial races for the non-partisan Cook Political Report. “If he does pull off an upset, then the general is probably pretty competitive. If Raimondo, or less likely Tavares, is the nominee, then Democrats have an advantage.”

A Fleming & Associates poll conducted Aug. 11 to 14 showed Raimondo leading with 32.2% of the vote to Taveras’ 26.8% and Pell’s 25.6%. That said, Pell has been surging in recent weeks, in part thanks to a television commercial where his wife, figure skater Michelle Kwan, promotes his record on women’s issues. In a similar poll conducted in May, Pell drew only 11.5% of the vote.

And there are also a slew of independents running. The only serious candidate in contractor Todd Giroux. The four other independents include a Moderate Party candidate and a candidate for the Compassion Party.

The race is already the most expensive in Rhode Island history with candidates raising more than $12 million by the end of June, the latest date available for financial disclosures. 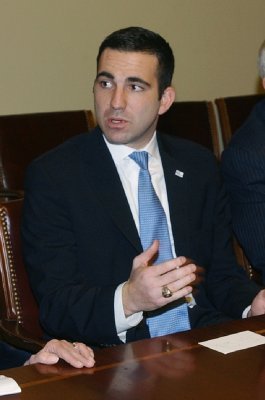 Veterans Groups Go on the Attack in 2014 Campaign
EDIT POST