At the end of last week’s episode, Hannah turned a corner: she recycled a story invented by Caroline about watching a cousin die in order to explain to Adam her lack of sorrow over David’s death. After that disturbing moment, we knew that Hannah was no longer just selfish — she was wantonly destructive.

Things only got worse this week. Adam and Hannah go to David’s funeral and meet the Grindr-using editor’s (surprise!) wife. The widow confuses Hannah for another one of David’s writers — a formerly obese girl whom David has raved about. Hannah is immediately insulted, though she later describes a watered down version of this interesting and empathetic girl as “her brand.” More on that later.

David’s wife, after telling Hannah that David was gay “sometimes,” divulges that the publishing company is dropping all of David’s projects, i.e. Hannah’s e-book is dead. Hannah, ignoring the fact that she is surrounded by grieving people, asks the widow if she knows the name of another publisher. The widow justifiably replies, “If I do give you another name, will you get the fuck out of here?”

Jessa, equally oblivious to her surroundings, complains about the fact that her friend faked her death to avoid her as Shoshanna tries to study. Shoshanna’s plan to be free and experimental seems to have taken a toll on her GPA, and she needs to get her grades up if she’s going to become an accomplished businesswoman within 15 years.

“What happens after the 15 year plan?” Jessa asks.

“It would be, like, insane to think about that,” Shoshanna says.

Back in Hannah and Adam’s apartment, Adam and Caroline are fighting as usual. Hannah tries to be their Dr. Phil, which it turns out means whispering to both parties as if the other isn’t there. Hannah asks each sibling to share his or her feelings. Adam says, “I feel like she’s an evil person who pukes on everything metaphorically,” an apt description of many characters on this show. When it’s her turn, Caroline accuses Adam of having a latent sexual desire for her.

Marnie interrupts the fight when she calls Hannah to ask her if she wants to see her new kitten (which she bought from a man on the street selling animals out of a backpack). Hannah says she can’t come over, which seems par for the course for the Hannah-Marnie friendship. Marnie hangs up and tells the kitten that he’s her best friend. Looks like Marnie’s getting pretty lonely — even if that kitten (pictured above) was indeed adorable.

Hannah meets with a new publisher about her book. They love her and her stories — the editor’s assistant describes her as Mindy Kaling meets Joan Didion, which for those unfamiliar with memoirs written by hilarious women is pretty much the best compliment you can get. They ask Hannah to describe her brand.

“I’m from the Midwest, so I will always be 15-45 pounds overweight, depending on how far I live from the coast” [laughs from the editors] “the farther I am from the coast, the fatter I am.” She adds that she is open to a fault, willing to share stories others would only tell their most intimate friends with the entire world. Sound familiar? That’s because it’s a more appealing version of the woman David’s widow describes — slightly overweight with little control over what she says.

Since anyone would want to read a memoir written by such a person—or at least anyone in the Girls viewership would—Hannah gets a deal. The editors say they want to turn her stories not into an ebook but into a real paper book. That you can feel with your hands. Those still exist, right?

Meanwhile, Marnie shows up at Ray’s apartment asking him to tell her what exactly is wrong with her since she needs to fix herself and Ray is always telling people off anyway. She also makes a point of insulting Ray’s apartment and neighborhood through a backhanded compliment.

Ray tells her she’s a phony who uses people, but that she acts that way because she’s insecure, so that makes her sympathetic. (Thank you, Girls writers, for reminding us that however fake or selfish these characters are, there’s a reason for their behavior, so they must be sympathetic.)

She’s hurt, so of course they end up sleeping together — because whenever two characters who shouldn’t otherwise be alone in an apartment together end up that way, they’re going to hook up. Ray, fresh off his breakup with Shoshanna, tells Marnie as she leaves, “Maybe for now we should keep this on the DL, the down low.”

Marnie respondes: “Go f*** yourself. Like I’d advertise this.” This sort of terrible exchange seems ripe for a classic Hollywood love-to-hate-you romance. Marnie is lonely after all (see: calling her kitten her best friend).

Back to Hannah, who’s treating herself to an ice cream cone after hearing the good news about her book deal. Hannah’s father calls her to tell her about a “small procedure” that he had. Being Hannah, she interrupts him to tell him about her book deal. He informs her that the contract Hannah signed with David’s publishing house said that Hannah doesn’t get the rights back to her stories for three years — which to a 25-year-old is apparently equivalent to a million years.

Hannah tells her dad, “You’re loopy from your procedure or whatever.” Hannah’s parents’ decision to cut her off in the first episode of the first season is making more and more sense.

Hannah comes home, depressed, and encounters Caroline, who’s eager to empathize by sharing her own not-so-tragic stories about her failed acting career. When Hannah lashes out at Caroline, Caroline points out that Adam isn’t around to comfort Hannah: Classic Adam, when things get tough, he bails.

This seems patently false, given Adam’s heroic rescue of Hannah during her mental breakdown at the end of last season, and Hannah recognizes it as a tactic to drive a wedge between her and Adam. It turns out Adam was right about his sister trying to manipulate them all along. Hannah promptly kicks Caroline out.

Happily ever after, right? Nope. Adam loses it at Hannah for kicking his sister out with nowhere to go. “I’m supposed to be taking care of her,” he yells before leaving her on the couch to pout.

On thinking David was gay: “He had a gay app on his iPhone and liked to show his ankles, but what does that even mean in this day and age?”

Ray to Marnie after calling her a big fat phony: “That being said, I still like you…because behind it all, I think you mean well, and I’m old enough to recognize that all of this bulls**t comes from a very deep, dank, dark, toxic well of insecurity.”

Jessa says she’s going to get a job at a children’s clothing store.

Shoshanna: “Are you sure that’s the kind of job you should be having? Like being near things that children are near?”

Jessa: “I want something with a touch of innocence.”

Shoshanna, calling after her: “You have a criminal record.”

Most Popular on TIME
1
Who Should Be TIME’s Person of the Year for 2020? Vote Now
2
The 10 Best Albums of 2020
3
Iran's Foreign Minister Suggests Israel Behind Killing of Nuclear Scientist 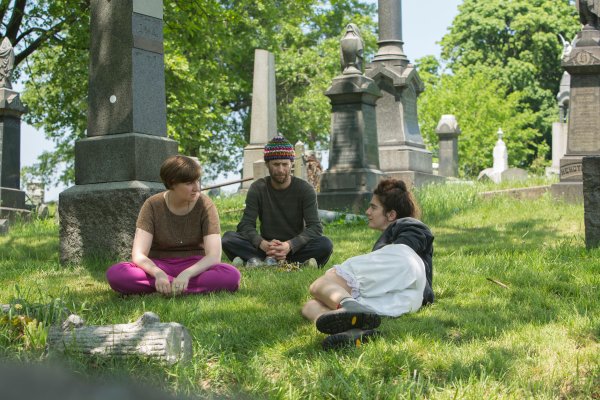 <i>Girls</i> Recap: The Girls Cope with Death
Next Up: Editor's Pick