Speaker Boehner: Our Economic Recovery Is Stuck in the Senate

This week, as summer comes to a close, members of the House and Senate will return to Washington. But perhaps only one legislative body can accurately claim to be returning to work. While Democrats in the Senate have been dragging their feet this Congress, the House of Representatives has been busy proposing and passing solutions to America’s most pressing problems.

In the last year and a half, the House has passed more than 40 bills aimed at creating jobs, supporting wage earners, and easing the financial pains that working families all over America are suffering with in President Obama’s economy. Where are these bills now? They are stuck in the Senate. Why they are stuck, is a question for Senate Majority Leader Harry Reid.

These bills are not thousands of pages long, nor are they partisan attempts to slam massive, new, and unwanted federal government programs down the throats of the American people. We all remember the disaster that became Obamacare. Passing something before we know what’s in it may be the Pelosi Doctrine, but it’s certainly not a transparent way to govern.

Instead these common-sense jobs bills, many of them bipartisan, are aimed at strengthening small businesses, allowing working moms and dads to keep more of their wages, and helping our seniors and our veterans. But instead of working with Republicans on the American people’s priorities in September, Senator Reid will instead focus on his obsession with the Koch brothers. This obsession is costing our economy jobs and has turned the United States Senate into a legislative graveyard.

The president likes to remind Americans he may use his fancy pen and phone, threatening undesired executive action. But if he really wants to use his pen to make progress on any number of these issues, then he should pick up the phone and start dialing Harry Reid’s number and tell him to allow a vote on these jobs bills. We have plenty for him to sign.

Even though the president and his party in the Senate have not been willing to deal with us, Republicans will continue to work and pass meaningful legislation this month.

Our American Solutions package will include several bills focused on creating jobs and kick-starting our economy. Americans are looking for answers to the problems they face, and our solutions will help them find work, lower the cost of living, and restore opportunities.

This common sense legislation deserves to become law, but the House cannot do it alone. We need willing partners in the President and the leadership in the Senate. We also cannot afford any more delays. The Congressional Budget Office recently reported that our economy would grow by just 1.5 percent this year, much slower than the Obama administration predicted. On top of that, 7.5 million workers remain in part time jobs while wanting a full time job, and a large majority of Americans believe we are headed in the wrong direction.

We do not have to wait until after Election Day to work together. If the administration and Senate Democrats change course, we can begin to make a real difference for American families right now.

This September the House will focus on providing solutions to address the American people’s priorities, and that means jobs. It is time for the White House and Senate Democrats to put politics aside and start putting people first. They can start by following the House’s lead.

John Boehner is the Speaker of the United States House of Representatives. 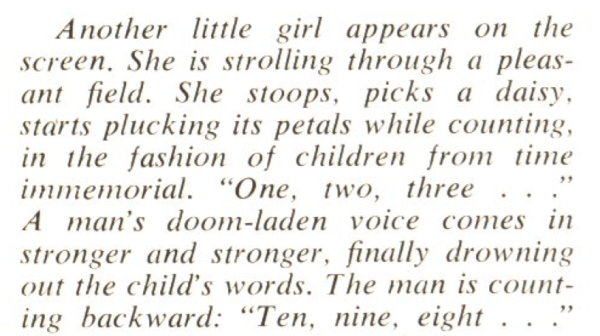 Watch History's Most Infamous Political Ads
Next Up: Editor's Pick