On Monday, the Obama Administration moved to punish Russia for annexing the region of Crimea with a round of financial sanctions. The reply from Moscow’s political elites was either a laugh or a shrug. None of the individuals targeted that time were particularly close to President Vladimir Putin, nor were they senior enough to threaten his entire hierarchy. But the laughter turned to consternation on Thursday after the latest round of U.S. sanctions.

On its website, the U.S. Treasury Department published a blacklist of 16 government officials and four members of what it called Putin’s “inner circle.” It was an impressive list, and the implicit threats of what’s to come were even more pointed than the asset freezes it imposed. Here are a few that Putin could find between the lines of the sanctions list:

1. Now it’s personal. It’s not just about Crimea or Ukraine anymore. It’s not even about punishing Russia’s economy. It’s about making life as uncomfortable as possible for Putin and his closest friends.

In its explanation of the blacklist, the U.S. Treasury Department refers to a place called the Ozero Dacha Collective, a gated community of lakeside villas that Putin and his pals set up near St. Petersburg in 1996. At the time, Putin was just making his move from his hometown, where he’d served as a functionary in the mayor’s office, to a position in the Kremlin. Many of his old friends moved with him to the capital, and as Putin’s influence grew, so too did the fortunes of the Ozero Collective. Many of the men who had summer homes next to Putin in that community went on to become billionaires or senior officials under his rule, and the word ozero, which means lake in Russian, has become almost synonymous with nepotism in the Putin era.

The Obama Administration’s direct assault on the members of Putin’s clique goes to the core of Putin’s inner circle, and for a man as loyal to his friends as Putin has been through the years, that will turn this conflict into a personal grudge.

2. Secrets are no longer safe. Few state secrets are as carefully guarded in Russia as the personal finances of its President. Though rumors and unconfirmed reports have pegged Putin’s personal fortune at around $40 billion, the Kremlin has always maintained that its master is a civil servant of modest means, earning less than $200,000 in 2012 and owning only one Russian-made car.

But in its statement on Thursday, the U.S. Treasury Department stated that Putin has investments in a company called Gunvor, one of the biggest oil traders in the world. That is not public information, and although the U.S. government hasn’t given its source, this little bombshell comes with an implicit warning: The White House knows things about Putin’s wealth that he does not want going public.

3. Insiders are not immune. Last year, Putin tried to preempt Western sanctions against Russia’s elites. In his state of the nation address, he ordered all state officials to close their foreign bank accounts and bring their assets home. The move was meant to give the Kremlin some immunity from the unrest that Western blacklists are designed to spread through the halls of power. And even if his officials did not comply with that directive, they would be left in no position to complain when those sanctions hit — Putin had already warned them this was coming.

But that vaccine does not seem to have worked against the sanctions leveled on Thursday. The targets this time included not just officials, but companies and institutions that do not have the option of bringing their assets home. Bank Rossiya, a lender run by one of Putin’s close associates, will have a hard time operating internationally now that its access to U.S. capital markets are restricted. So will the companies of the billionaire Rotenberg brothers, Putin’s childhood friends, who are both on the blacklist.

4. Anyone could be a target. The list of sanctioned individuals is astounding in part for its randomness. In addition to Putin’s ex-KGB confidants and judo buddies, it includes such obscure politicians as Aleksandr Totoonov, a member of the culture, science and information committee in Russia’s upper house of parliament. Why him? The only reason given in the statement is that he supported the deployment of Russian forces in Ukraine. But so did practically every single lawmaker in Russia, so all of them are now fair game.

At least publicly, both houses of the Russian parliament have defied this threat, openly calling for the U.S. to blacklist all their members in solidarity with their sanctioned colleagues. But in private, many of them have likely been making calls to their bankers and real estate agents to figure out what assets they now stand to lose. 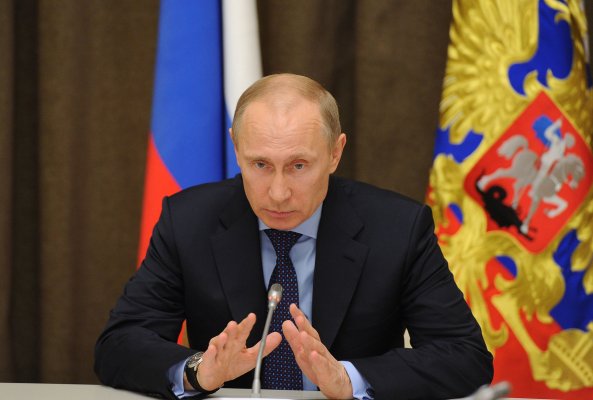 Putin Has Already Lost
Next Up: Editor's Pick