Bird Watching: The Joys of Loving the Baltimore Orioles

You may not have any interest in being a Baltimore Orioles fan. Indeed, most people have no interest in being Baltimore Orioles fans. It requires you to root for a mid-market team from a relatively small city with a middling record of success. It’s been 31 years since the Orioles were in a World Series (a cool 11,315 days if you’re counting, which Baltimore fans do, and which is one more reason you probably don’t want to be one of them). Then there’s the business of playing in the same division year after year, season after season, as the New York Yankees and the Boston Red Sox. Talk about getting your lunch money stolen.

But if you are an Orioles fan (and again, this is not something you should try at home), there are compensations. There is their blistering, and still ongoing, 2014 season, which saw them enter September with the biggest division lead and the second best record in baseball. How that will ultimately play out is something Orioles fans dare not even contemplate, since hot seasons can turn very cold very fast, and until something is done and in the history books it may as well not have happened at all.

Still, there is plenty in those history books already. There were the four World Series appearances and two championships from 1966 to 1971 — a sweet, buck-a-seat, pre-free-agent era, when little teams sometimes did very big things. There was the four-game sweep of the juggernaut Los Angeles Dodgers in that 1966 Series, in which the Dodgers scored a run apiece in the second and third innings of the first game — and then never scored again. A 5-2 Orioles win was followed by three straight shutouts. And then there was Earl Weaver — which is a phrase that does not require another word to be thrilling and riotous and make you so much happier to be alive than if you couldn’t say a phrase like “and then there was Earl Weaver.”

And there was too, 19 years ago this week, Cal Ripken, the Hall of Fame third baseman turned shortstop turned Iron Man turned legend, who on September 6, 1995 played in his 2,131st consecutive game without a rest — a 13-year run that broke Lou Gehrig’s record of 2,130 games, which up until that point had stood for 56 years. Ripken padded his record for three more years after that, finally taking himself out of a match-up against the Yankees on Sept. 20, 1998, after 2,632 games.

As TIME reported in that record-breaking week in 1995, in the 13 years Ripken had been showing up for work, doing his job, showering and going home, 3,695 other major leaguers had gone on the disabled list at one point or another — no fault of theirs surely, since the body breaks down, especially when it’s going through all the unnatural torquing and torsion a baseball player subjects it to. But Ripken’s body never broke down — or at least not so badly he couldn’t ice it, soak it, wrap it and then go out and play the next day. And if the very same injuries he was willing to play with were the ones that landed those other lunch-bucket players on the DL, well that was on their heads, wasn’t it?

Ripken played with thoroughbred blood in his veins — the son of Cal Ripken, Sr., a longtime Orioles coach and onetime manager; and brother of Billy Ripken, an infielder who played for four Major League teams during a career that included two stints with the Orioles. But it was Cal’s baseball success that seemed strangely fated. In 1972, when he was only 12, he was helping the team as a clubhouse boy during a training stint in Asheville, N.C., when a deranged local began shooting at the field. Then-shortstop Doug DeCinces spotted Ripken out in the open, scooped him up and hustled into the dugout with him. “I don’t think his feet touched the ground,” DeCinces said years later. In some ways they didn’t finally touch down until 1998.

TIME gave its nod to a few other Orioles in the long history of the team (60 years) and the magazine (91 years). There was the July 27, 1979, profile of Weaver, the Orioles’ manager — an issue that featured a somber looking Jimmy Carter filling almost all of the cover, and a red-faced Weaver screaming from the corner flap. It was an image that perfectly captured the crowing, overachieving, look-at-me rooster that Weaver was — and that he made his teams.

There was, too, the Sept. 11, 1964 cover — 50 years ago this week — of manager Hank Bauer, who would take the Orioles to that memorable World Series two years later. The headline of the story was “Old Potato Face” and it opened with a scene of Bauer meeting with reporters in his stadium office, finishing a beer (“The heat don’t bother them,” he said of his team, “’cause they drink this here good beer”) and crushing the can. Then he walked off to the shower — stark naked. 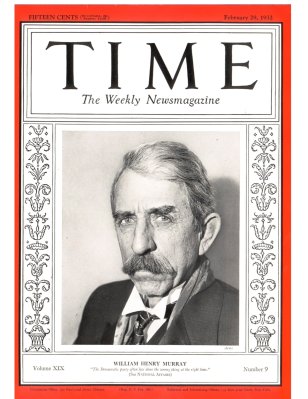 Here's Bill Murray on the Cover of TIME
Next Up: Editor's Pick