By Mary Corliss and Richard Corliss

It’s the week when film festivals are in full flower. Venice began Aug. 27 and concludes tomorrow; Telluride commandeered the long Labor Day weekend; and Toronto, the biggest, started last night and ends Sep. 13. Usually movies that premiered on the Lido show up in force at TIFF, but not so much this year. Toronto did pick up Venice’s one-Pacino-two-Pacino double bill of The Humbling and Manglehorn. TIFF is also showing 99 Homes, with Andrew Garfield and Michael Shannon butting egos over the housing crisis. But it ignored the Katherine Heigl indie romance Jackie & Ryan, the elegantly animated feature The Boxtrolls, and even the esteemed Iranian feminist drama Tales. They couldn’t find slots among Toronto’s 300 features.

We’ll get to those and other significant Venice films tomorrow. For now, here are tips on three promising films we saw there and which have been exported from the Italian to the Canadian festival.

Johns acknowledges that, for the high-flying Tom, a desk-jockey job as the first-person shooter in a Realpolitik video game known as “Warheads on Foreheads” is like going “from a Ferrari to a Ford Fiesta.” But being grounded to play World War Wii isn’t Tom’s most aching concern. It’s that the Defense Department and the CIA have expanded the targets from a “personality strike” — with near-certainty that the subject in the crosshairs is a terrorist — to a “signature strike,” an educated guess. The curt questions for Johns escalates from Tom’s “Why do we wear a flight suit, Sir?” to the proposition posed by young Airman Vera Suarez (Zoë Kravitz) after a drone attack that likely took out innocent civilians as collateral damage: “Was that a war crime, Sir?”

In a nebulous defensive action against barbarous insurgents who behead journalists and let the atrocious videos go viral, the U.S. government’s surgical strikes can seem a clean antidote to a rancid threat. Our enemies don’t play fair with civilians; why should Tom feel an idealistic itch if the pickup truck he’s ordered to incinerate, which may carry explosives, has a woman and her child visible in the back? Wrestling with these dilemmas puts a strain on Tom’s marriage to the former Vegas dancer Molly (January Jones), who finds him more emotionally remote than when he was home between combat missions.

The domestic scenes drag down the dramatic pace but underline Tom’s isolation from his work, as incarnated by Hawke with a stalwart anxiety far from the careless banter of the father he plays in Boyhood. In the air, Tom could chalk up a “good kill” — a bomb he was sure took out some bad guys. (He never considers whether the intelligence that led to those raids was as iffy as the orders he now receives for drone strikes.) The film finds its most plausible, exciting life in the camper, where Tom can detect a cowboy bravado in the voice from Langley telling him to drop the big one and don’t ask why.

Set in 2010, and “based on a true story,” Good Kill percolates with the tension of a war within the war: between the High Command’s conviction that the target is worth hitting and a career warrior’s ethical convictions. Hawke’s Tom still has a conscience; and like his character in Gattaca, he has to wonder if he’s the one of the few humans left in this brave new war. —R.C.

In the old Hollywood phrase, they “meet cute”: New Yorker Jude (Adam Driver, from Girls) and Italian émigrée Mina (Alba Rohrwacher) get locked together in the fetid bathroom of a Chinese restaurant. Within one four-minute scene, recorded in a single shot, they argue, panic, recoil from the stench of his ordure and fall in love. Writer-director Saverio Costanzo seems to be setting up an indie screwball comedy, as these attractive opposites get married and have a son, but as it turns out, he has other plans: he sharply detours into a low-key, and thrill-free, horror scenario about a woman who believes her baby has paranormal powers and practically kills him with her odd notions of child-rearing. Hungry Hearts aims to be less Bringing Up Baby than Rosemary’s Baby, and gets nowhere near either of those films or any other good one.

Mina is a virtual orphan: her mother dead, her father estranged. Alone in the world, she seems dependent on the loving, increasingly baffled Jude, and his sensible mother Anne (Roberta Maxwell). Then she gets pregnant and consults the fortune teller who says she will have an “indigo baby” of uncommon gifts. When the child is born, she deprives him of most foods, which compels Jude to care surreptitiously for his underfed child. “My son vomited meat — what do you know about that?” Mina asks accusingly. Both the father’s and the grandmother’s attempts at intervention prove fruitless until the film’s end, by which time most viewers will have become exasperated trying to figure out what is driving Mina, and why two major film festivals decided Hungry Hearts was worth showing. —M.C.

Baby abduction and trafficking are epidemic in China. The one-child policy put a premium on young male lives; the highly prized little boys couldn’t legally be bred in bulk, so many were stolen from parents who would do anything to get them back. In February, the government broke one ring, arresting nearly 1,100 traffickers, and saved 382 abducted children. Those big numbers can catch the world’s attention, but one story can touch the heart: That is director Peter Chan Ho-sun’s achievement in Dearest, the true tale of a man who lost his son, fought to get him back, then lived with the ambiguous consequences.

Since his divorce from Lu Xiao-juan (Hao Lei), Tian Wen-jun (Huang Bo) has raised their son Pengpeng. The three-year-old disappears one afternoon while playing with friends and doesn’t return. Heartsick, Wen-jun goes to extraordinary lengths to publicize his grief — making videos, singing on street corners — and dealing with blackmailers who demand a fortune for a child they don’t have. He keeps going because, as he explains, “Hope is like food. Without it you die.” Eventually Wen-jun and Xiao-juan get reliable word of Pengpeng’s whereabouts on a remote farm and, in a thrilling sequence, abduct the child abducted from them.

The film then shifts boldly to focus on Li Hong-qin (Vicki Zhao Wei), who had raised the boy for half his life and, not knowing the circumstances of his arrival on the farm, thinks of him as her own. When the authorities take away her other child, also an abductee, and place her in an orphanage, Hong-qin engages a young lawyer (Tong Dawei) to get the girl back. Essentially an epic movie (Wen-jun’s story) and its intimate sequel (Hong-qin’s) in a single 2hr.10min. package, Dearest has some of the propulsive force of Chan’s martial-arts marvel Dragon / Wu Xia and the capacious heart of his Comrades, Almost a Love Story.

Huang Bo, best known as a comic actor, invests a furious intensity in Wen-jun; but the exceptional performance is that of Zhao Wei, who became a star in China and Hong Kong by flashing her big brown eyes in a series of winsome dramas and farces. Here, playing a simple, rural woman with few tools to retrieve her children, Zhao Wei crafts a symphony of pathos and desperate strength. She embodies the movie’s belief that — deprived of the only thing they love, and resolved to fight for it — anyone can rise to heroic or tragic grandeur. —M.C. 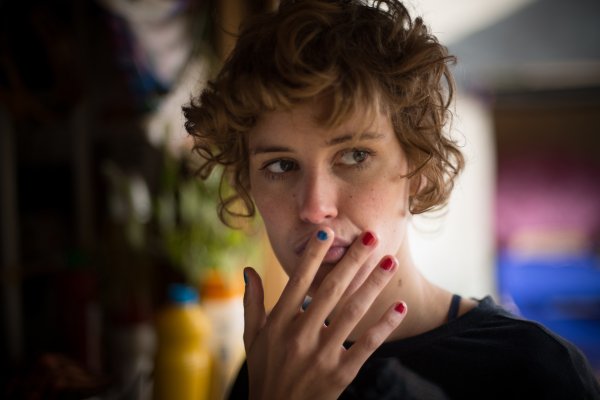 REVIEW: 'Wetlands': A Schmutzy Comedy With an Adorable New Star
Next Up: Editor's Pick