Diplomacy Is the Way To Beat the 'Islamic State'

Syrian refugees, who had been based in Arsal but fled after recent fighting, sit on the back of a pick-up truck with their belongings at the Lebanese border crossing point of Masnaa, at Bekaa Valley, Lebanon, Aug. 8, 2014.
Wael Hamzeh—EPA
By Patricia DeGennaro

During the short drive from Beirut toward Damascus, our taxi turned off the road and pulled into a refugee camp in the Lebanese Bekaa Valley. As a journalist and academic who writes about international security, I wanted to see the refugee situation I had read about for myself. I watched as a truckload of women went to work in in Lebanon’s most fertile area, gathering vegetables and grapes for the area’s prized vineyards. They earn a pittance – about three dollars per day– so they can pay rent to the owners of the land where they occupy makeshift shelters.

People huddle behind burlap, peeking through doorways covered by sheets to see visitors. Children sneak up and as I turn, they giggle and run away. They ask for nothing. Empty water bottles litter the camp. I am humbled at the generosity the residents show. They invite us in for coffee and tea and I feel ashamed of myself as I drink. They have so little, but it would insult them if I declined.

This is one of many camps that now scatter the region. The United Nations estimates that up to two million Syrians are now refugees, many housed in Lebanon, Turkey, Iraq and Jordan. Another two million are also internally displaced from their homes.

Syria is just one nation in the region experiencing what seems to be an endless humanitarian disaster – sparked initially by the Arab Spring uprisings that began more than three years ago.

This disaster has fueled the rise of the “Islamic State” (IS), which has brutally exploited the chaos to establish its own nation. Some 12,000 foreign fighters have flocked to the region in support of the fledgling IS. And after acquiring U.S. and Iraqi weapons IS, is becoming stronger and more organized every day.

The Obama administration is reportedly laying the groundwork for a military expansion into Syria from Iraq to pummel the IS. This is the wrong move. And it reflects a much larger failure that American policymakers must address before we can intervene in this regional turmoil: Our once powerful diplomatic muscle is atrophying.

As early as World War II, the U.S. began squandering its diplomatic tools – and the net effect has been a collective amnesia: the only effective option we seem to remember is the military option. Militarization of U.S. foreign policy had been creeping up for decades. Beginning with President Theodore Roosevelt’s 1907 “Cruise of the Great White Fleet” to the current day, the U.S. has been asserting its military influence to a much greater degree. In the name of weak and failed states that may not be able to control terrorism and international criminal activities, all of which threaten America’s interests, the U.S. military has steadily increased its security related outreach through military means. By selling arms, military to military training, and the establishment of new joint task forces and commands, civilians have lost control of international objectives and programs. In the Middle East, only military civilian affairs teams are often allowed to venture out of the embassy compounds to work with locals.

Over the years, Administrations have become increasingly centralized when it comes to international policy and decision-making, preferring to construct policy within an exclusive inner circle. Their solutions muzzle and declaw U.S. civilian foreign policy agencies whose expertise is too often ignored. They, in turn, funnel civilian energies into supporting specifically outlined projects while leaving the complex ones to the military. Consequently, the U.S. has forgotten how to shape policy through negotiation, alignment of interests, knowledge of history, cultures and peoples. Our representatives in Congress and the Administration have neglected strategies that would leverage economic and political interests. Instead of helping to craft long-term solutions for our national security, the U.S. continues to rely on short-term military fixes. Today, there are few in Congress willing to question the military or its spending. Yet our civilian agencies are continually interrogated with little discussion about their vital role, never mind the budget.

Let’s look at the impact of this strategy on the Middle East: Years of ignoring Israeli aggression, turning a blind eye to kingdoms supporting fanaticism in the name of religion and championing regional dictators with pure disregard for humans has left the region in turmoil. It also seems to have left the U.S. with no options to quell the instability—that is, no option other than war.

While our most gifted civilians sit behind concrete and barbed wire, Congress continues to approve the transfer of small arms, anti-tank missiles and shoulder held surface to air missiles to “moderate” forces in the region. The unfortunate part is now the most fanatic IS has those weapons. Without careful planning on the civil, political and governance level, no military solution is going to stop them. And to be sure, no form of diplomacy or non-lethal aid is going to rid the world of IS. However, there are plenty of diplomatic tools that can diminish its impact, and work to bring the region a bit of peace without empowering yet another hegemonic country or organization that gruesomely outdoes the other.

This must be done in a comprehensive manner. Successful international negotiations are a balancing act – before intervening, it’s essential to understand the political, military, economic, regional, international, tribal histories and current realities of a place. Any actor must come prepared with the tools of negotiation – the identification of specific interests that can be aligned or traded, and a deep understanding of the nuances of body language, for example. This never happened in Iraq. In 2003, the Administration immediately readied for war, ignoring diplomatic tools like dispatching teams of negotiators, aligning with national and regional players, and, developing a deeper understanding of the stakeholders to decode the rhetoric of the deposed leader, Saddam Hussein. Today, with the rise of IS, the U.S. seems once again to be responding with piecemeal reactionary solutions that are not addressing the major foundations of the region’s problems.

To do this we need to start deploying our geopolitical experts with cross cutting personal skills, and give them some of the jobs that right now are in the purview of the military. And that means a rethink of the way USAID and the State Department are structured. Neither has a cohesive strategy to focus on today’s multi-dimensional, increasingly complex and interconnected world challenges. We do not need more papers or files, better twitter accounts or a bigger presence on Facebook. We need seasoned nonpartisan professionals who are working to find options to support U.S. interests, build relationships with international counterparts and are given the freedom to unequivocally support all these “values” of democracy – like, freedom, and human respect.

The military is expected to “prevent, shape, and win” with full government support, but U.S. Secretaries of State are expected to wing it while handcuffed Foreign Service Officers are stuck behind compounds trying to understand the population and its multidimensional intricacies, often getting little if anything done. This has to change.

Diplomacy takes time, patience, and risk. It also builds long-term trust and rapport with possibilities beyond war for a prosperous, or at the very least, a less devastating future.

Patricia DeGennaro is a senior intelligence analyst for ThreatTec, LLC and a professor of international security at New York University’s Department of International Affairs. She recently completed a Franklin Fellowship at the United States Agency for International Development in the Office of Civilian Military Cooperation. This piece was originally published in New America’s digital magazine, The Weekly Wonk. Sign up to get it delivered to your inbox each Thursday here, and follow @New America on Twitter. 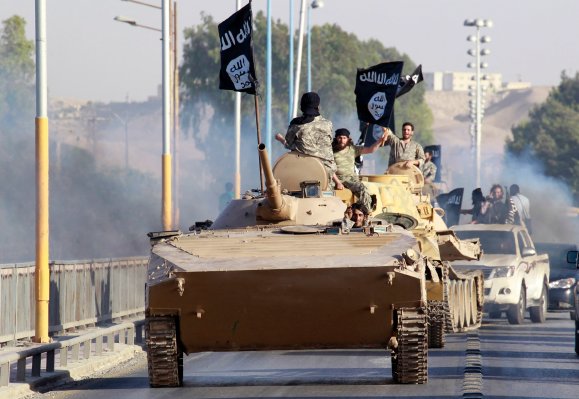 ISIS Is Not Just Un-Islamic, It Is Anti-Islamic
Next Up: Editor's Pick