An Intelligence Expert Turns to the Mysteries of Human Health

Zhao Bowen can’t get us out of the parking lot. Which is odd, because he is precociously competent at a lot of other things. In April, at the age of 22, he stepped down as the head of a multimillion-dollar research project to found a pioneering biomedical startup. We are trying to drive from his office to the Beijing construction site that will soon be his lab. “Take a right,” he says. “Or maybe it’s a left?”

Forgive the lapse: Zhao is new to the area. After spending five years at one of the country’s top biotech companies, BGI Shenzhen, Zhao moved to the Chinese capital this year to build his own firm, QuantiHealth. His team members are now designing their digs from the ground up, with an eye to efficiency and SiliconValley–style dynamism. They zip across the office park on mini motorized unicycles, occasionally wheeling up to the nearby McDonald’s drivethrough for snacks — much to the shock of the staff there.

Zhao has a way of surprising people. Born and raised in Beijing, he tested in to Renmin, one of the country’s most prestigious high schools. At 15, he started skipping “the easy classes” to sequence the genome of the cucumber at a nearby lab. Two years later he dropped out of school. It was an almost unthinkable move in China’s regimented and competitive education system but one that perhaps signals a new willingness to break educational and career norms. He soon moved south to the city of Shenzhen and found work at BGI.

Zhao’s swift rise and cutting-edge work there is today the stuff of legend. But when he landed there at 17, the wide-eyed kid did not know what was in store. BGI gave him a bed in its dormitory, work in its labs, and a modest salary. It was lonely, but “interesting” — his favorite word. Months later, he was joined by a friend from Renmin, Ma Ge. When Zhao was given his own project to run, Ma joined his team: “Bowen could talk to me about everything, stuff that you can’t really talk to parents about,” he says.

When they were not exploring the city’s rock clubs, the two discussed science and philosophy, which was helpful because Zhao was soon leading a major international research effort. The goal was to use genomics to crack the code of human intelligence — to find out why some people, like Zhao, are so smart. Taking advantage of BGI’s fleet of high-powered DNA-sequencing machines, the team started testing samples from people with high IQ, searching vast amounts of data for tiny clues.

The project made headlines around the world, in part because of concerns that the research might eventually enable parents to screen embryos in an effort to boost their future children’s IQ. Zhao has clearly spent a lot of time considering these questions, but ventures, rather carefully, that fretting is premature and misses a key point: genes are only part of the picture. Based on what he has seen so far, he believes that genetics account for maybe 60% of our cognitive ability, as measured by IQ. The rest is learning and experience.

This year Zhao decided to broaden his focus and go into business on his own. His new company will employ bioinformatics — the use of computer programming to analyze biological data — to study how the human body responds to environmental factors. Funded by private Chinese companies, QuantiHealth will work on developing quicker and more effective ways to evaluate health, both in terms of screening for risk and diagnosing diseases like diabetes.

With the country’s health care sector expected to boom — health spending is projected to grow from $357 billion in 2011 to $1 trillion in 2020, according to McKinsey — Zhao’s new company is playing in an increasingly lucrative market. Zhao insists it is not really about the money, not yet. “At this point, it’s about ideas, ” he says.

The idealistic emphasis on innovation may be standard fare in the Silicon Valley, but is less common in China. Though the ruling Chinese Communist Party talks about promoting entrepreneurship, the economy is still dominated by hulking state-owned-enterprises, and intellectual property is something of a free-for-all. There is a risk, of course, that Zhao’s project will come alive only to be snared in a regulatory net, or otherwise controlled by the sprawling state. He counters that China’s economic dynamism more than makes up for opaque regulations and fleets of would-be copycats: “I would not want to be anywhere else,” he says. “Competition makes things better.”

To illustrate his point, he asks Ma, now his assistant, to bring over “the wheel” — his motorized unicycle. The device was first developed in California, but a Shenzhen-based firm refined the design making it smaller, cheaper, and easier to use, he says. BGI was not the first to do genetic sequencing, but it was the first to do it on such a large scale; QuantiHealth aims to improve medical testing one small change at a time. “Micro-innovation,” Zhao says, looking down at the circular contraption. “When people bother to copy you, you know you are doing something right.”

To celebrate this idea, and the startup, Zhao bought each of his new employees a wheel of their own. Together they spent a few weeks learning to ride the things — a process that left Zhao with a scrape on his right elbow. But it was fun. “We went from nothing, to semi-pro, to almost pro, quite quickly,” Zhao says, before giving the thing a whirl. I’m not surprised to see him glide across the asphalt, arms outstretched, in a smooth, controlled arc. He learns fast.

With reporting by Gu Yongqiang in Beijing 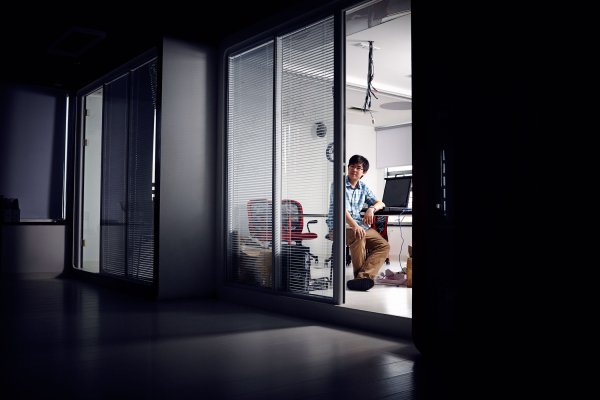