Since the Jennifer Lawrence photo hack, Internet security has come under scrutiny. But why do many young women feel the need to take and share nude selfies in the first place? Don’t get me wrong: I think hackers are morally reprehensible and should be prosecuted to the fullest extent of the law. But I also think that we need to build an alternative to the dogma “If you’ve got it, flaunt it.” Young women are told that it’s a sign of being proud of your sexuality to “sext” young men—a philosophy that has turned girls into so many flashing beacons, frantic to keep the attention of the males in their lives by striking porn-inspired poses.

Today if you watch the famous Algerian-French singer Enrico Macias singing to his late wife, Suzy, about how he “won her love,” their dynamic seems as if it’s from another planet. Some might watch this decades-old video and imagine her passivity indicates that she wasn’t empowered. But I see something else in her shy manner and dancing eyes: a drama between them that was not for the public to see. The words of his song are certainly moving—“In the exile’s nights, we were together/ My son and my daughter are truly from you/ I spent my life … waiting for you”—and yet there was even more than what those beautiful lyrics revealed.

The pressure on girls today to take sexy selfies comes out of a culture that routinely equates modesty with shame, instead of recognizing it for what it really is: an impulse that protects what is precious and intimate. Teenage girls need to know that when boys ask them for naked pictures, they can—and should—say no. It’s not merely because those pictures can find their way onto social media. (Even without the aid of hackers, such photos seem to have a way of slipping their iPhone collars and circulating with astonishing ease). A better reason to say no is that, having set a higher standard, maybe someone will write a love song for them instead.

And if the boys don’t, who cares? Modesty is, at its essence, about having an internal sense of self, not needing others’ approval of how you look (naked or otherwise) to know that you have a unique purpose in this world, and certainly not needing all your friends to like your Facebook post in order to know you’re great.

My heroine this month is Zelda Williams, who stood up to online bullies when they weren’t satisfied by the photos she had posted of her late father Robin Williams. When they attacked her cruelly and publicly—some Twitter users even sent her horrific Photoshopped pictures of her dad to “punish” her for not posting enough pictures of him—Zelda zinged back on Instagram: “My favorite photos of family are framed in my house, not posted on social media, and they’ll remain there.” Her message was both brave and countercultural.

The larger issue here is our addiction to externalizing our private experiences to the point where we have nearly lost the ability to simply enjoy moments privately (or be allowed to mourn privately).

Did you hear about the woman who felt compelled to update her Facebook status while driving on a North Carolina highway? “The happy song makes me HAPPY,” she typed, a second before her car crashed into a truck. A Polish couple recently wanted to take some selfies near a cliff, and then—putting a bit of a damper on things—they actually fell off the cliff. It’s easy to distance ourselves from these tragedies and think, That’s crazy! That would never happen to me.

And yet social media is filled with videos of parents scaring their toddlers or filming their tearful reactions when told that Mommy ate all their Halloween candy. I seem to be nearly the only person who doesn’t find these videos funny, nor do I think that the appropriate reaction to a child’s tantrum is to film it and commiserate on Facebook about how hilarious it was. To me, these parents have fallen off a different cliff, albeit an imperceptible one; they’re breaking a private trust in order to feed the public’s appetite.

I can’t prove it, but I believe that the collapse of the public-private distinction has dialed down our capacity for empathy. Real empathy requires a private, intimate space, and, of course, a time when you’re not on Facebook. Last Saturday, my 3-year-old daughter fell asleep in her Sabbath finery after a spirited trip to the park, and it was one of those perfect moments. I gazed at her sweet slumber on the couch and I sighed, saying to my husband, “The Shabbos photos you can’t take are always the best ones.” (As Jews who observe the restrictions of the Sabbath, we don’t take photos on this day.) Then I realized, maybe it’s not that Sabbath photos are better in any objective way. Since I couldn’t immediately reach for my phone and capture the picture, I had no alternative than to be in the moment and drink it all in: her little chest rising and falling, her fancy dress artfully decorated with grass stains and crumb cake. What was she dreaming about? I was able to notice things and really throw myself into the moment in a way I never would have had I rushed for my camera as usual.

From a technical standpoint, the scene was mundane, but private, unmediated moments have a special quality. Let’s try to enjoy more of them.

Shalit’s first book, A Return to Modesty: Discovering the Lost Virtue, was recently released in a new 15th-anniversary edition. 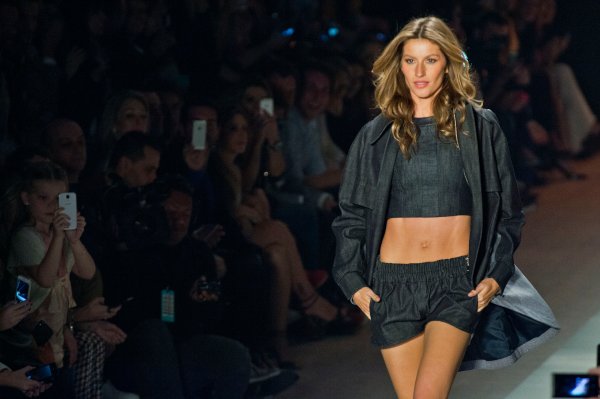 Watch Gisele Bündchen Kick Butt in This Under Armour Ad
Next Up: Editor's Pick