We Need to Stop Guilting Parents into Cooking Dinner

On the highway of hallowed institutions, there are few so venerated as the family dinner. Maybe reading aloud to your kid, breastfeeding and playing catch come close, but those have a limited lifespan. The family dinner is the church at which all parents, especially moms, are expected to become regular and lifelong worshipers.

Studies have repeatedly shown that kids who eat en famille are less likely to be overweight, more likely to eat healthy foods, have reduced incidence of delinquency and have better grades, mental health and family interactions. The evidence appears to be pretty overwhelming: cook for your kids and eat with them or they’re doomed. You’re consigning them to a life as chubby little lowlifes with a D-average and no self esteem. It’s not much to ask, right?

Problem is, the plurality of kids today are being raised by people who work outside the home. That means somebody, having put in a solid eight or so hours, has to drag his or her weary derriere home and then get his or her Martha Stewart on. Takeout, as all right-thinking parents know, is not at all the same thing as a home-cooked meal. Which is also not the same thing as an organic, locavore, humanely raised, fairtrade, low in fat, salt and everything else except labor meal. A meal which will no doubt be greeted with an aghast face and a whiny demand for plain pasta.

So a new report that suggests the benefits of the home cooked family meal may be outweighed by the pressure of providing said meal should be welcome. Researchers from North Carolina State University interviewed 150 families and found that the whole whip-up-something-for-dinner directive is more like a whip-a-very-overburdened-horse for many families and utterly impossible for others. “Cooking is at times joyful, but it is also filled with time pressures, tradeoffs designed to save money, and the burden of pleasing others,” says the study, which was published in the summer 2104 issue of Contexts.

“The emphasis on home cooking ignores the time pressures, financial constraints, and feeding challenges that shape the family meal. Yet this is the widely promoted standard to which all mothers are held,” the researchers write, adding that it is moralistic, rather elitist and unrealistic. “Intentionally or not, it places the burden of a healthy home-cooked meal on women.” The researchers found that particularly among low income women whose inflexible and inconsistent work schedules prevented them from being able to be home for meals, let along cook them, the scoldy tone of the family dinner table fetishization crowd added unnecessary stress.

My go-to meal strategy is getting my husband to cook, since it involves fire and is therefore a very manly activity. Nevertheless I find myself having to prepare a couple of meals a week. (My second go to strategy, “international toast,” which involved toasting all the leftover crusts of different sorts of bread hanging around the freezer and serving them with eggs, no longer fools my kids, alas.) So you’d think I’d welcome the news that it’s probably better sometimes to skip it. But I don’t. Being both a breadwinner and an international toastmaker can be a drag, but it’s an even bigger to drag to be told that it’s not worth it.

I’ve put a lot of time and effort into making dinner—and making everyone eat the results. It’s stressful to discover that that’s probably too stressful to bother with. So I’m going home to cook dinner. But in act of protest against the forces which hold women to an impossible standard yet again, I’m probably not going make anything very good. 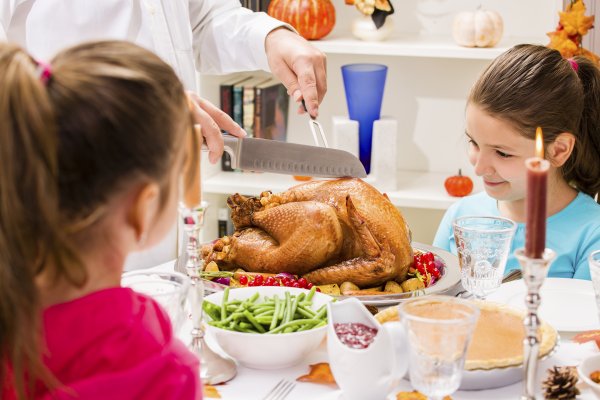 Why I Don't Eat With My Kids
Next Up: Editor's Pick