The gadgets were cool but the plot was a bust, reviewers tended to agree. When the U.S.S. Enterprise made its maiden voyage into American living rooms on this evening in 1966, it met with ambivalent reactions from an audience fascinated with space travel but skeptical of schlock. Star Trek, in which “a cruiser-size rocket ship… investigates new worlds and unimagined civilizations in deep space,” according to TIME’s 1966 TV listing, had plenty of both.

In the debut episode, Captain Kirk was attacked by a vampiric shape-shifting alien. Some critics may have been rooting for the alien; few had kind words for the show. Jack Gould at the New York Times called it “astronautical soap opera that suffers from interminable flight drag.” The Boston Globe’s Percy Shain found it “too clumsily conceived and poorly developed to rate as an A-1 effort.”

Scientist and prolific science fiction writer Isaac Asimov took issue with the show’s astronomical inaccuracies, which he pointed out in his 1966 TV Guide article, “What Are a Few Galaxies Among Friends?”

Critics may not have been surprised that the show was canceled after only three seasons. They certainly didn’t predict its profound and enduring cultural impact. The twelve Star Trek movies have so far grossed roughly $2 billion at the box office, and a new film is slated for release in 2016. The original show spawned five additional series, including an animated one. Star Trek: The Next Generation, ran for seven seasons and, in its heyday, was the highest-rated syndicated show in TV history.

In recent years, Star Trek has gotten more respect. Apart from the diehard Trekkies who dress up for conventions and master the Klingon language, a number of prominent public figures have outed themselves as fans, including Mel Brooks, Colin Powell and the physicist Stephen Hawking, who made a cameo on an episode of The Next Generation, appearing as a holograph alongside Albert Einstein and Isaac Newton.

There was more to the show than schlock, a new wave of critics attest. TIME’s Richard Zoglin defended the show in 1994, arguing:

Even Asimov eventually came around. He told TIME in 1967 that his writing schedule kept him confined to his attic office most of the time. He emerged only occasionally, he said, to watch his favorite TV show: Star Trek.

CORRECTION: The original version of this post misstated the number of Star Trek spin-offs. There have been five, including the animated version. 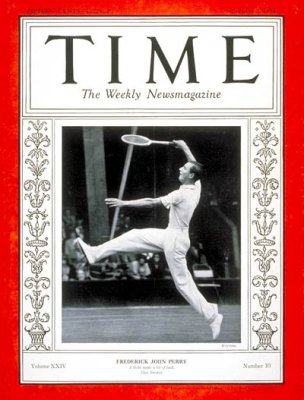 Remembering Fred Perry's Reign of Dominance at the U.S. Open
Next Up: Editor's Pick