Steve Buscemi as Nucky Thompson in Season 5 of Boardwalk Empire
Macall B. Polay—HBO
By Eric Dodds

After four seasons and 48 episodes, the HBO drama Boardwalk Empire will be wrapping its run with an eight-episode final season. Coinciding with the show’s conclusion, Boardwalk will also jump forward seven years to 1931 — and to the repeal of Prohibition. Simultaneously, the show will also be flashing back to earlier points in the life of Nucky Thompson (Steve Buscemi).

TIME spoke with showrunner Terence Winter about the Atlantic City drama’s jump in time, stories that went untold and the discrepancy between the fates of Nucky and Tony Soprano:

TIME: When did you know you wanted to flash forward to 1931 and what went into making that decision?

Terence Winter: We’d always intended to bookend the show with the end of Prohibition. Of course, the pilot took place on the night that Prohibition was enacted, so we knew that certainly if not the literal end of prohibition then toward the end of Prohibition would be where we wanted to finish up. ‘31 became really attractive to us because it was the year that Al Capone went to jail, it was the year that Lucky Luciano formed the Commission, which was the governing body of the mafia. It was very apparent by ‘31 that Prohibition was sort of dead in the water with the Depression setting in. After the crash of ‘29, ‘31 was the point where everyone started to feel the effects of that, even around the world. It was pretty clear to people that this was not a problem that was going anywhere soon, so ‘31 just offered so many differently possibilities creatively, so that’s where we chose to land.

At the same as you’re flashing forward to ‘31. you’re also flashing back to 1884. Was that something that you always wanted to do from the beginning?

We’d always talked about it, but we’d never settled on it—the idea of exploring Nucky’s past and linking it to the end of the series was really interesting to us. We had talked about his childhood before and the events that shaped him, but it’s so much more powerful to see it. It’s one thing to have it in exposition, but to actually be able to see young Nucky and his parents and Eli as a child, and actually experience what he went through and his first encounters with the Commodore and things like that was too irresistible. Also, to see the development of the city. You see the boardwalk in 1884 was just one hotel and a couple ramshackle buildings along the beach. In later episodes, we jump ahead to 1897, so you’ll see Nucky as a young man and you’ll see the city continue to grow. You’ll see a young Gillian, you’ll meet other people who have had really pivotal roles in Nucky’s life, so it’s been a gift to be able to explore the show through those different prisms.

There are so many rich characters in the show who you have to juggle — how concerned were you that the introduction of the flashbacks would make that job even more difficult?

I love these characters so much, and in some way it feels like there’s never enough time — they could each have their own separate series, it’s just all so fascinating to me. But it really is Nucky’s story, and at the end of the day, exploring Nucky Thompson’s psyche and the events that shaped his life took precedence over everything else — seeing his childhood and the things that made him the man he became was really the story that we wanted to tell.

How did the fact that Season 5 ended up being the final season affect your plans? Were there certain plot points that you had intended to explore that you didn’t have a chance to?

A little bit. Not enough to get us to lobby that we absolutely needed to continue beyond it. It started to become apparent to us in the middle of Season 4 that whether or not we were conscious of it, we were winding down. Nucky’s story was sort of heading toward conclusion, and for me as a showrunner and a storyteller, the worst thing is to feel you’re treading water or you’re just keeping a show on the air for the sake of keeping it on. It’s not the network TV model where we have to hit a certain number of episodes to be syndicated — that doesn’t exist anymore. It’s really the truest form of storytelling: when you’re done telling the story, you can be done. And HBO has given us that luxury. Into Season 4, it started to feel like we might be heading toward a conclusion for this character, and even though there were things in the gangster world that were attractive — the St. Valentine’s Day massacre, continuing to track the rise of Al Capone, Arnold Rothstein’s ultimate demise and fall — they weren’t enough for me to say, “Okay, well we really to keep the series on longer than it should be just to see those points.” Ultimately it was a little bit of a trade-off because I knew we wouldn’t be able to deeply explore those things, but you feel the effects of them even in 1931. When you come back, Al Capone is a superstar. By 1931, he’s being interviewed by Variety, which is a thing that really happened. Some of that dialogue was verbatim from the interview… [it’s] just mind-boggling. This guy started as a street thug, and now he’s a worldwide celebrity. For those reasons, it ended up balancing out and I felt it was worth skipping ahead and referencing those things in dialogue.

Have there been any characters or stories that you’ve come across or explored a bit where you’ve said to yourself, “I’d love to dig into this a bit, but there’s just no time or I don’t know how we’d fit this into our universe?”

Early on in the Capone research, turned out he had three brothers — there was Frank, Ralph and another one whose name escapes me. Frank and Ralph of course we’ve met, we know what happened to Frank and Ralph became integrated into the Capone organization, but the third brother, the white sheep of the family, left the nest, moves from New York and out to the West, changed his name and became a sheriff. His name was “Two-Gun Hart,” and he basically spent the Prohibition years tracking down and arresting bootleggers. This story was so weird and outlandish, that we kept saying, “God, can we work this in somehow?” And partly, I’d say, “This is the kind of thing I’d see on TV and wouldn’t believe, because it’s so crazy that I couldn’t believe it even though it’s true and you can look it up.” This guy, basically he’d come home once a year to visit his family and then he’d go back out West. He had this whole cowboy thing, a complete secret identity. He’s out there arresting bootleggers, meanwhile his brother is the biggest bootlegger in the entire country. And we played around with that, thinking about how we could work it in and ultimately decided not to. If we’d had more real-estate, story-wise, I think that would have been a really fun story to tell but there’s so much explaining to do, I don’t know how we’d work that in.

Even though there may not be any plans at all for this, if you had to pick someone to spin off into their own show, is there someone you think would be especially intriguing?

Changing topics — there’s been so much Sopranos discussion of late, particularly about Tony Soprano’s final moments. Did you ever have any thoughts about that? [Ed. Note: Winter was a an executive producer and writer on The Sopranos — credited with 25 episodes, more than anyone other than Chase.]

My takeaway was maybe it did, maybe it didn’t and the bluepoint was it didn’t really matter. At some point, you’re somewhere, and someone’s going to come out of a men’s room. And when you’re Tony Soprano, sooner or later — as Tony himself said, “When you’re one of these guys, you end up in prison or dead.” Very few of them retire and die in bed. If it didn’t happen that night, sooner or later it would have. When you’re a gangster, even going out for ice cream with your family is fraught with paranoia. And that’s basically what I took away from it.

Might it be safe to say that the ending for Boardwalk is not quite as ambiguous?

Yeah, I would not call it ambiguous [laughs]. 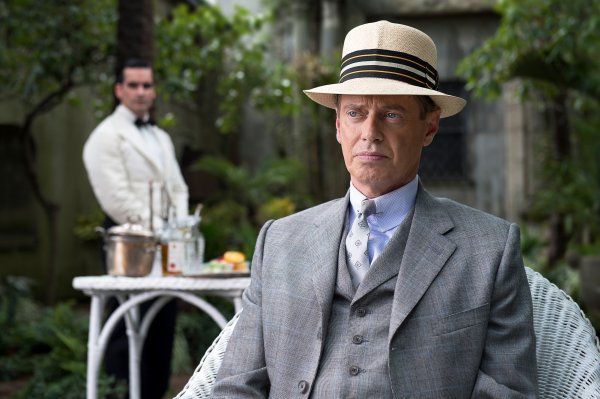 Boardwalk vs. Empire: Can HBO's Series Bring Its Two Sides Together?
Next Up: Editor's Pick