What Grover Norquist Got Wrong About Burning Man

I have at least two things in common with anti-tax activist and Washington-insider Grover Norquist.

The first is that we’ve recently attended our first burns, which is to say we’re both newly minted Burners, as in, we have both just returned for the first time from Burning Man, the annual gathering of about 70,000 artists, interlopers and their ilk in Nevada’s Black Rock Desert, a dystopian/utopian event dedicated to celebrating radical inclusion/expression/self-reliance/hugging and just about anything else people want it to be.

Our other commonality — I’ll get to that in a moment.

Burning Man has hosted more than a few high-profile capitalists over the years but few, if any, have been as controversial as Norquist, the the founder and wonk-president of Americans for Tax Reform who served as a key Republican ally and supporter of George W. Bush, Karl Rove and Newt Gingrich. But on Tuesday, Norquist wrote compellingly about his experience at “Burning Man,” as he adorably renders it (in quotation marks).

Burning Man is, as both a mass phenomenon and an individualized experience, literally beyond description, and I wouldn’t presume to speak for or about the entire community, if you can call it that. But as I wistfully shake the playa dust off my sleeping bag, I must say from one baby Burner to another: Grover, Vanity Fair is full of moop, I think you got it mostly right and I’m glad to have you on the team.

“Moop,” for the uninitiated, is Burning Man-speak for trash (Matter Out Of Place) and is one aspect of Burning Man that touched Norquist most. “Burning Man is greater than I had ever imagined,” he writes. “I have been to large demonstrations in favor of the environment, and the trash left behind is knee-deep. At Burning Man, you are hard-pressed to find a cigarette butt on the ground. There are no trash bins. Participants carry it in, and they carry it out.”

This is true, and what has Norquist particularly tickled about seeing thousands of Mad Max extra lookalike types carefully ashing cigarettes in Altoid tins is that Burning Man operates — or so he believes — on the principle of self-reliance without a lot of government intrusion and with few rules.

But here Norquist’s understanding of Burning Man falls apart. You’re only really self-reliant insomuch as you bring in enough water and food (likely purified and inspected for safety by U.S. government agencies) to last for a week or so. And the government is everywhere at Burning Man, since the whole time you’re dancing or body painting or riding an enormous flame-spitting octopus or whatever in a landscape protected from spoilage by the Bureau of Land Management. And Black Rock City actually has lots of really important rules, like not dumping water on the ground and not driving. There aren’t persnickety rent-a-cops running around staking out potential litter bugs, but rules are enforced by Burning Man Rangers and more directly by the community itself through feelings like shame, withholding participation in taco night at camp or giving you a terrible “playa name” like Moophole or something. (The other thing Norquist and I have in common is that many people thought our real names were our playa names. Such is the lot of guys named after muppets and beautiful American cities, amirite Grovester?).

But I digress. Norquist’s most important and perfectly accurate insight is that “anyone complaining about a Washington wonk like me at Burning Man is not a Burner himself. The first principle of Burning Man is ‘radical inclusiveness,’ which pretty much rules out the nobody-here-but-us liberals ‘gated community’ nonsense.” Norquist is as welcome as anyone at Black Rock City. Indeed, his extreme squareness in an environment that advertises a place where you can “have an orgasm” without many additional details might make him an especially welcome member of the tribe. The one sure way I found to draw stares and heckles at Burning Man was to go for a morning jog. Had I been wearing a unicorn head or risking sunburned butt cheeks I suspect things would have gone differently.

Norquist writes that he wants to “attend a national political convention that advocates the wisdom of Burning Man.”

I couldn’t agree more, Grover, and I hereby offer this vow.

Grover, if you agree, I promise to meet you outside the convention hall at the 2016 Republican National Convention in Cleveland at dusk on the last day of the event whereupon we will play some sick beats, get naked as possible (thongs?) and dance until sunrise. I’ll talk to Robot Heart about DJing. You talk to the Republican National Committee about making sure everyone packs out all their moop and travels only by foot, bicycle or mermaid/butterfly/church/etc. car.

In the meantime, see you on the playa. 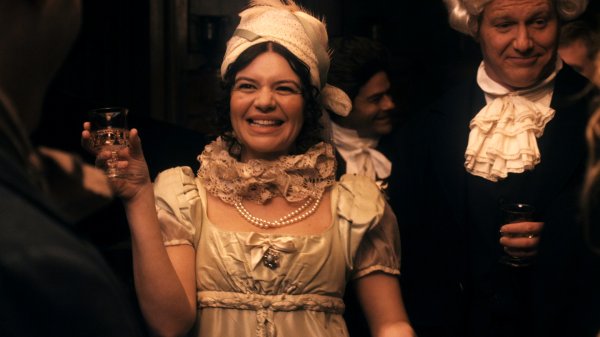 Here's What Drunk History Taught Me About Feminism
Next Up: Editor's Pick